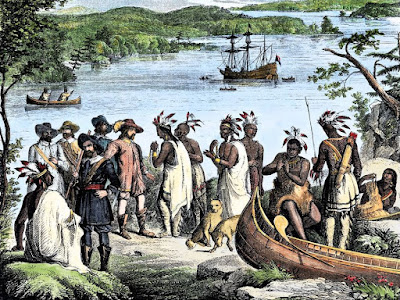 Edmund Hawes came to New Amsterdam, afterwards called New York, the year after the Dutch settled there.
He was a stone mason. His partner was a Dutchman. In Holland these two had been working together for some time. They were employed by the Dutch to come to the New World and assist in construction.

The Dutch West India Company established a fur trading post in New Amsterdam in 1614. At that time there were many Puritans in Holland, driven there from England by religious persecution.

Both of these stone masons brought their wives. After the construction work was done, the Dutchman and his wife returned to Holland. Edmund and his wife remained in New York where Edmund accepted employment with the company as a fur trader. He seems to have understood Indians from the start. "Squitum Waw Waw Ool Kaw," or Indian words something similar, was his Indian name. The words meant, something to the effect of "the man who makes jumping soldiers."

He used to make little jumping jacks for the Indian children, and in the forests he would gather a few sticks here and there for later use, or would stop and work a little on one of his toys.

The Dutchmen thought Edmund strange, the Indians thought him crazy. Edmund himself probably thought it was a slick way to avoid arrows, war clubs and scalping knives. I know it was, for Indians never injure anyone they believe insane.

Edmund and his wife had one child born in New York, a boy. His wife died from the effects of childbirth, and Edmund placed his boy in charge of a squaw, superintended to a considerable extent by a friendly Dutch family. He named the boy Edmund.

He continued to trade with the Indians and was successful. After the boy was able to get about on his own legs, Edmund's trading trips increased in length. 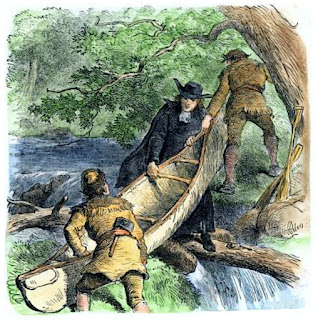 On one such trip he was gone all winter. This time he went as far as the great falls between two great lakes. (This would have to be Niagara Falls, between Lake Ontario and Lake Erie, and not so long after their discovery by the Frenchman who received renown for it.)

Edmund accumulated some money trading for the Dutch.

Finally he heard of the Pilgrim settlement at Plymouth. Later he and his son went to Boston on an English ship which had been blown far off its course to Boston, and which made the port of New York to refit before proceeding to Boston. They arrived in Boston in the early summer of 1635. (This would compare with the date of June 3, 1635, given by one history, also the year other authorities have given; and it would account for his name not being on any passenger list from England.

Edmund and his son lived in Boston and later Dedham until the son made up his mind to marry. A girl named Eliony Lumber (Lombard) was what is called a bound girl. Her people had placed her as security for a debt, which meant she must work out at small wages if she lived long enough.

Old Edmund bought the contract, and left her free to marry his son, which she did at Dedham. Old Edmund then outfitted for a trading trip to the Indians.

He hoped to reach the Mohawks again...but was never heard from afterwards.