JAMES BABCOCK AND HISTORICAL ANTECEDENTS TO OUR SECOND AMENDMENT 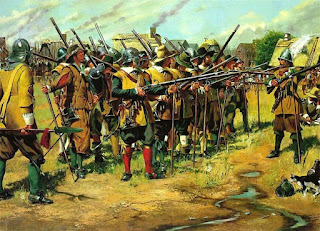 James Babcock (1612-1679) our 10th great-grandfather was born 1612, in Essex County, England, and was admitted an inhabitant of the town of Portsmouth, Rhode Island on February 25, 1642. His occupation was a blacksmith and gunsmith.

On October 5, 1642, James Babcock and Richard Moris were ordered "to look up all the armes in the Towne within the month above writ," and "to mend any which were defective for use." Owners were to forfeit five shillings if they failed to bring the arms in time.

Again on May 23, 1650, it was ordered that Captaine Richard Morris, George Blisse, James Badcock, Peter Busserole, William and Gabriel Hick, all excuses sett aparte shall mende and make all lockes, stockes and pieces byat by order from the warden of each Towne shall be from any of the inhabitants thereof presented to them, for a just and suitable satisfaction in hand payd without delay under the penaltie of ten pounds, to be levied by distraint from the head officer to the use of the sayd Towne's milittia.

It is ordered that all men that have gunns and pieces to mend, and have need to have them mended for their present defense, shall forthwith according to order carrie those pieces to mende upon paine of forfeiting ten shillings a piece, which shall be levied by distraint from the head officer of the Towne to the use of the sayed Towne's militia." The order goes on to describe the contents of the town magazine required by law.

ARMED AND READY: THE PURITAN TRADITION OF BRINGING GUNS TO SERVICES 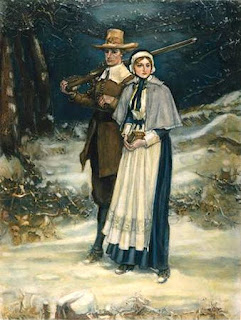 For many years after the settlement of New England the Puritans, even in outwardly tranquil times, went armed to meeting; and to sanctify the Sunday gun-loading they were expressly forbidden to fire off their charges at any object on that day save an Indian or a wolf, their two "greatest inconveniencies." Trumbull, in his "Mac Fingal," Avrites thus in jest of this custom of Sunday arm-bearing:

"So once, for fear of Indian beating,
Our grandsires bore their guns to meeting,--
Each man equipped on Sunday morn
With psalm-book, shot, and powder-horn,
And looked in form, as all must grant,
Like the ancient true church militant."

In 1640 it was ordered in Massachusetts that in every township the attendants at church should carry a "competent number of peeces, fixed and compleat with powder and shot and swords every Lords-day to the meeting-house;" one armed man from each household was then thought advisable and necessary for public safety. In 1642 six men with muskets and powder and shot were thought sufficient for protection for each church. In Connecticut similar mandates were issued, and as the orders were neglected "by divers persones," a law was passed in 1643 that each offender should forfeit twelve pence for each offence. 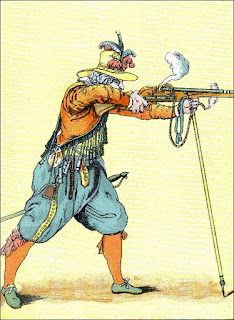 In 1644 a fourth part of the "trayned hand" was obliged to come armed each Sabbath, and the sentinels were ordered to keep their matches constantly lighted for use in their match-locks. They were also commanded to wear armor, which consisted of "coats basted with cotton-wool, and thus made defensive against Indian arrows." In 1650 so much dread and fear were felt of Sunday attacks from the red men that the Sabbath-Day guard was doubled in number.

In 1692, the Connecticut Legislature ordered one fifth of the soldiers in each town to come armed to each meeting, and that nowhere should be present as a guard at time of public worship fewer than eight soldiers and a sergeant. In Hadley the guard was allowed annually from the public treasury a pound of lead and a pound of powder to each soldier.

From: The Sabbath in Puritan New England

Posted by Drifting Cowboy at 1:02 PM