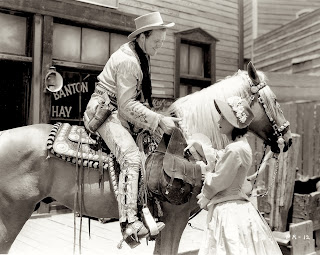 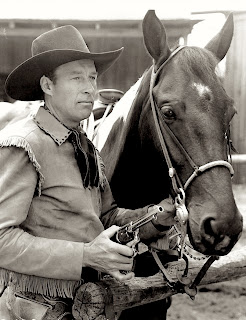 Sonny -- one of many -- paint horses ridden by Wild Bill Elliott during his early days with Republic. 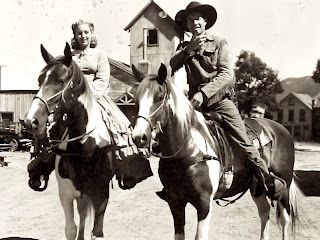 Bill's family was in the quarter horse breeding business, so it's no surprise Bill had a number of flashy paint horses -- many were called Sonny. 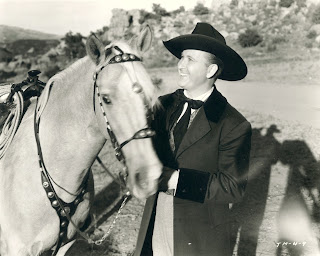 Starlight -- was most likely a studio rental horse -- ridden by Tim McCoy in this oater filmed on the upper inversion Ranch.  According to Bobby Copeland, McCoy didn't hold horses in very high regard.  To McCoy they were use a tool to get the job done, so he took what the rental stable sent. 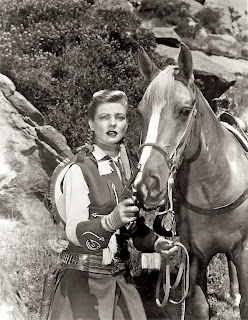 Target -- a palomino -- co-starred with Gail Davis in the 1954 "Annie Oakley" TV series.  According to other researchers, three horses were used to play the role of Target, and they probably all came from the Hudkins Brothers rental stables. 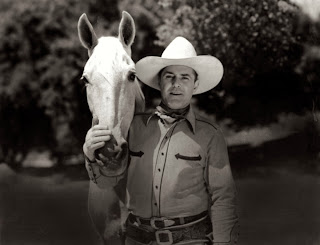 Tarzan -- the palomino 'Wonder Horse' -- owned by Ken Maynard was half Arabian and half American Saddle horse.  Like most of the star horses Tarzan had plenty of stunt doubles to handle the heavy work.  Ken was arguably to finest horseman of all the cowboy stars, and Tarzan was one of the best trained horses in film.  Here's a link to a swell clip that features Tarzan playing lame in Phantom Rancher (1940)… 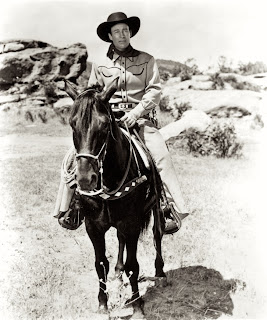 Thunder -- the magnificent black stallion in Republic's Red Ryder series -- was owned first by Wild Bill Elliott.  Remember in my post about Allan 'Rocky' Lane's horse Black Jack -- I told you that according to Bobby Copeland's book "Silent Hoofbeats" Black Jack was a Morgan that Lane bought from Bill Elliott in 1946.  Well if you compare two photos (the one above of Thunder, and the photo of Black Jack at http://a-drifting-cowboy.blogspot.com/2012/09/four-legged-pals-those-wonderful-movie.html) you'll see even the saddle, bridle, nose band, and bit were part of the sale. 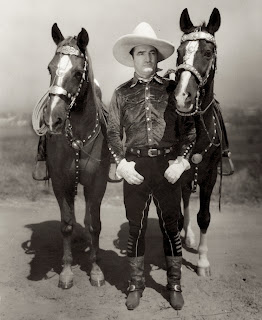 Tony (left 1899-1942) -- was billed as 'The Wonder Horse' or sometimes 'Tony the Horse' -- and appeared in over 180 films with Tom Mix.  When he was injured at age 22 Tony was turned out in a pasture in the San Fernando Valley, and replaced by Tony Jr. (right) who Tom rode to the end of his film career (photo courtesy of Bruce Hickey). 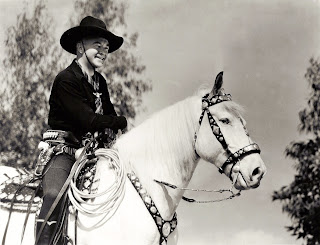 Topper -- was the second white horse -- owned and ridden by William Boyd (in his Hopalong Cassidy roles).  Hoppy's original horse was injured on a film in 1939, so Topper -- a double -- began his career as co-star on Hopalong Cassidy films and the television series.  Topper is buried at the Los Angeles Pet Memorial Park in Calabasas, California. 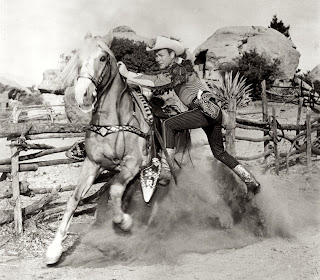 Trigger, a big, beautiful Golden Palomino stallion, co-starred with Roy Rogers in many of his movies and Roy's TV show.  Trigger was often billed as "the smartest horse in the movies."  Roy originally purchased Trigger from the Hudkins Brothers Stable for $2500.00 (on time payments).  When the original Trigger (known as the 'old man') died in 1965 Roy had him taxidermied, so he could be displayed in his museum.  Last year the taxidermied Trigger sold at auction for $266,500.00. 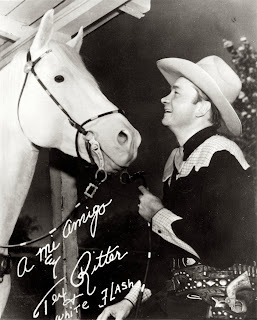 White Flash -- a handsome white horse was owned and ridden by Tex Ritter during the late 1930s and 1940s.  Like most B-Western stars Tex owned several white horses to assist with movie stunts.

Posted by Drifting Cowboy at 3:07 PM