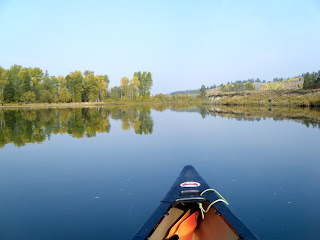 I had been looking forward to paddling the Oxbow Bend on the Snake River in Grand Teton National Park for many months.  This year I talked my wife into going on a vacation in the Tetons, Yellowstone and Glacier Parks.  She isn't really the outdoors type but agreed to read a book for a few hours while I went fishing in the Oxbow.

Secretly, I hoped she would get excited by the wildness of the place, but it was no go.  Driving into the Oxbow put-in I spotted an Osprey, but she never saw it.  Then as soon as I parked and was getting the canoe unloaded we were treated to a bull elk bugling a couple hundred yards to the north -- it only inspired her to get back into the motorhome and lock the door. 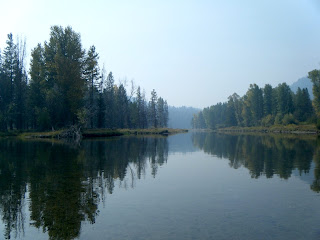 Had she been a little adventurous she might have seen the young bull moose that waded across a channel of the Oxbow while I was loading my gear into the canoe. 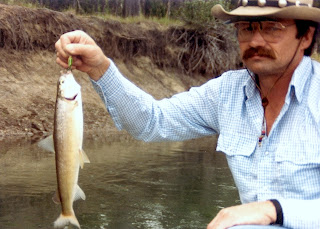 I first discovered the Oxbow Bend 25 years ago, and I've visited many times since.  It's funny the place hasn't changed much -- except maybe the fish population.  In the late 1980s about all I caught was mountain whitefish.  Today the dominant fish seem to be lake trout.  Over the years I've been treated to seeing a huge variety of wildlife including moose, elk, beaver, otter, fox, osprey, eagles, swans, pelicans, cranes, geese, and many species of ducks.  While I didn't see the actual animal I've also seen the fresh tracks of a grizzly bear, black bear and mountain lion on the muddy banks of the Snake River. 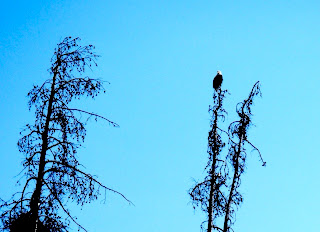 This year I got skunked as far as fishing goes.  I could see big (20-24") lake trout 10 feet under my canoe sucking up nymphs off the river bottom, but couldn't get them to even glance at a variety of lures.

But, as usual I wasn't disappointed by the wildlife viewing.  The bald eagle in the photo above flew in and landed in the upper limbs of a pine tree while I was trolling.  We watched each other for about an hour -- during which time he preened and snoozed while I paddled back and forth over my favorite fishing hole. 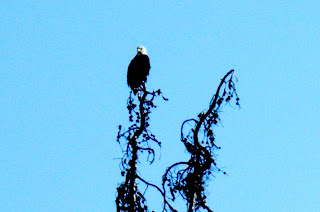 I wonder if the eagle got skunked too.  Those trout were too deep for his talons even if his keen eyes had located them.

Oh, and Joyce finally got to see her own bald eagle right on I-15 in Idaho Falls :)

Posted by Drifting Cowboy at 1:17 PM