As I've told you in earlier posts I bought, sold and traded Old West antiques and collectibles for the past thirty years, but it wasn't until about the mid 1980s that I learned about prison made hitched horsehair trappings.

Hitching horsehair involves using hair from a horse's tail and tying thousands of tiny half hitch knots to form a pattern.  The art was originally brought to the Americas by spanish explorers and has since been used by cowboys, Indians, sheep herders, mexicans and especially prisoners.  Montana's State Prison at Deer Lodge is perhaps the best known source for hitched horsehair cowboy trappings.   Other prisons known for hitched horsehair include Yuma, Arizona; Walla Walla, Washington, and Rawlins, Wyoming.

Over the past the past twenty-five years Joyce and I have owned many hitched horsehair bridles, hatbands, and belts. 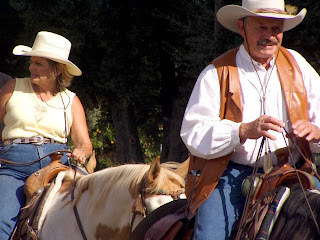 In the photo above, Joyce's horse Zinger (left) has a mexican hitched horsehair bridle, and my hatband (right) is from Deer Lodge prison in Montana. 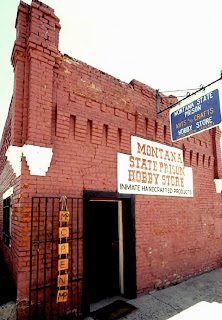 On our return trip -- from a recent vacation in Glacier National Park -- we had a chance to visit the Montana State Prison Hobby Store in Deer Lodge, Montana.  The store is a mecca of hitched horsehair and offers hundreds of hatbands, dozens of belts, and a handful of complete bridles. 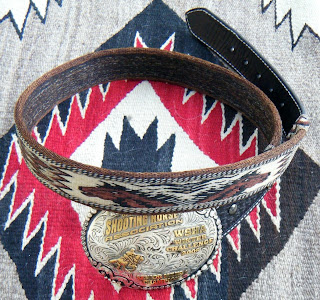 Since I reach my allotted "three score and ten" this month Joyce splurged and bought the belt I've always longed for my birthday. How do you like the horse heads?

I've been told it takes between six months to a year to hitch a full bridle and reins, so I'm guessing this belt took a month to craft.  This beautiful belt was created by Jim White.  Hitching is a prison hobby that earns money to send home, improves self esteem, and helps keep the peace in an otherwise dreary place.