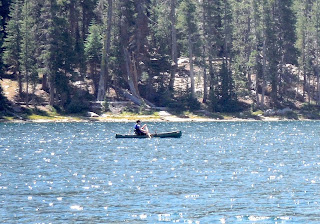 I have been fascinated by canoeing and canoe travel for over fifty years, but it was just three years ago that I made a genealogy breakthrough and traced my ancestry back to the very beginnings of Canadian history.  SEE: Cowboy Legacy -- French Connection… http://a-drifting-cowboy.blogspot.com/2011/10/cowboy-legacy-french-connection.html

This past week I had an opportunity to go camping with my grandsons.  I introduced them to canoeing, and at night my campfire tales were stories of our family history and its association with canoes and the fur trade. 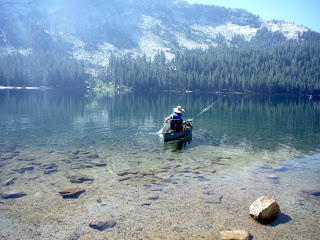 I explained to them that several of our ancestors had been engaged in the fur trade as a coureur de bois -- or voyageur -- in Nouvelle France during the seventeenth and eighteenth centuries.  Many of them lived in Laprairie, Quebec, just across the river from Montreal. 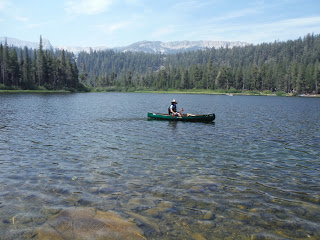 They learned that a coureur de bois was a French-Canadian woodsman who traveled by canoe throughout New France (later known as Canada) and parts of the United States to trade various European goods for furs -- especially beaver pelts -- with First Nations people (Native Americans also called Indians).

When the fur trade first began, First Nations people brought furs to the trading posts in their canoes.  Furs were unloaded and traded for goods such as muskets, axes, knives, blankets, cooking pots and trinkets -- such as trade silver and beads.  It didn't take long before some of the men at the trading posts decided they would go into the forests to get the fur themselves.  These men became known as coureurs de bois (runners of the woods).

The coureurs de bois learned the ways of the woods from the First Nations people. They learned how to canoe, hunt and snowshoe.  Native peoples taught them how to construct canoes out of birch bark.  They dressed in the same kinds of clothes and ate the same food as the First Nation peoples -- typical meals consisted of pemmican, deer or moose meat and dried corn or peas. 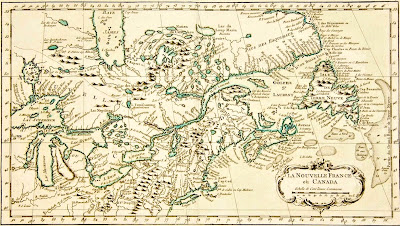 Fur traders would leave their Montreal homes in the spring with canoes filled with supplies and trade goods.  They traveled down the Ottawa River to Lake Huron, and from there they would travel another month or more -- paddling as many as 12 hours a day -- until they reached their final destination up to 1200 miles away.

Because it was dangerous work the coureurs de bois often traveled in large groups known as fur brigades. Together they could set up camp and help keep watch for enemies at night. They also had more men to hunt and fish for food as they traveled. 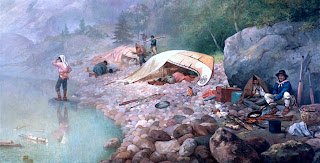 The life of the courier de bois was hard.  They had to portage their canoes, supplies and furs; battle with insects; hang their food to protect it from animals; and in the winter they had to dig snow caves to keep warm at night. 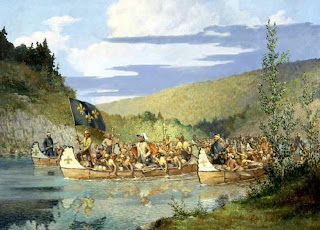 Brother of Thomas Godefroy de Normanville, Jean Godefroy arrived in New France with him about 1626 and served under Champlain in the capacity of interpreter. After the capture of Quebec by the Kirkes in 1629, Jean Godefroy stayed on in the colony, living in the woods with the Indians.

Having become a seigneur-settler, the former interpreter turned to clearing the land, although continuing to trade in furs. From 1646 on, together with his relative Jean-Paul Godefroy, he was a member of the Communauté des Habitants.

Head of the Godefroy de Tonnancour family, Jean Godefroy had married, probably towards the end of 1636 (the private marriage contract is dated 15 December), Marie Leneuf, daughter of Mathieu Leneuf, Sieur du Hérisson, and of Jeanne Le Marchant of Caen, Normandy, and sister of Michel Leneuf. Out of this marriage there were born between 1637 and 1658 11 children, of whom 8 were sons who almost all distinguished themselves in the service of New France.

Jean Godefroy’s worth was recognized by Intendant Talon, who in 1668 obtained letters of nobility for the former intepreter and his family; unfortunately, because of an administrative error, these letters could not be registered within the required time and were, theoretically, cancelled. In practice, however, the intendants Duchesneau and de Meulles*, in 1681 and 1685, as well as the king himself, in 1718, officially recognized the Godefroy arms.

Participation in the fur trade and the cultivation of his seigneury had not brought wealth to Godefroy.  In 1672 the governor, Buade de Frontenac commended him to the king’s generosity, as “one of the first to have come to this colony . . . , burdened with a very large family, having several daughters and six sons [two others having died, one sometime before 1655, the other in 1661], all of whom are courageous men who are the first to offer to go on any expedition . . . , there being no better canoemen in the whole colony”; the Sieur Godefroy however “is not too comfortably off, [having] a daughter whom he cannot marry because he has nothing to give her as a dowry.” The king turned a deaf ear to this request.

Francois Le Ber -- my 8th great grandfather [Fur Trader - Francois and his three sons were Coureur-de-bois. They were known as the fathers of the fur trade.] Born in 1626 in Rouen, Seine-Maritime, Haute-Normandie, France. Francois died in Laprairie, Quebec, Canada, on 19 May 1694; he was 68.

Francois Bourassa -- my 7th great grandfather [Fur Trade - Francois signed on as a Coureur De Bois to go to Fort Michilimackinac] -- a French fort and trading post located along the southern shore of the strategic Straits of Mackinac connecting Lake Huron and Lake Michigan -- in 1690, but did not return in the fall 1691 as planned.  What happened to Francois was unknown.  Marie believed her husband was dead and she was referred to as a widow in September 1693.  But Francois returned safe and sound in 1694.] Francois died in Montrèal, Quebec, Canada, on 9 May 1708; he was 49.   Born in 1659 in LuÁon, Eure-et-Loir, Centre, France. One of his sons was Rene Bourassa…

Rene Bourassa -- my 6th great grand uncle [Fur Trade - followed in the footsteps of his father] and he became a partner of Pierre Gaultier de Varennes, sieur de La Vérendrye in the fur trade and established Fort Vermilion (Manitoba) in 1736.] 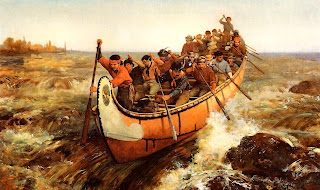 Other fur traders among my ancestors include:

Bourgeois
Bourgeois, according to an 18th-century writer, were not nobles, ecclesiastics or magistrates, but city dwellers who "nevertheless by their properties, by their riches, by the honorable employments which adorn them and by their commerce are above the artisans and what is called the people." By extension, it meant the owner of a ship, the man who gave artisans work and, in Canadian usage, the fur trader employing hired men.

Coureur des bois
(French for "runner of the woods") a fur trader who went into the woods to find fur and trade fur with First Nations.
Compagnie des Habitants (or Community of Inhabitants ) is a company founded in 1645 and consists of traders in New France who owned the monopoly on the fur trade of the Company of New France from 1645 to 1663 .

Fur brigade
Convoys of Canadian Indian fur trappers who traveled between their home trading posts and a larger HBC post in order to supply the inland post with goods and supply the HBC post with furs. Travel was usually done on the rivers by canoe or, in certain prairie situations, by horse. For example, they might travel to Hudson Bay or James Bay from their inland home territories. This pattern was most prevalent during the early 19th century.

By canoes, which comprised the most common fur brigades, the trip from the home fort headed downstream in groups of four to six large thirty foot freighters with twenty-four to thirty-six voyageurs. These loads were relatively light, consisting mainly of furs. By contrast, the return voyage was upstream and involved much heavier bulkier loads, being the ammunition, traps and various other supplies needed for the next winters trapping season.

These brigades were an annual event, involving the most able and skilled men of the tribe. Depending upon distances traveled, a brigade could occupy much of July, all August and a successful return to the home fort in early September. 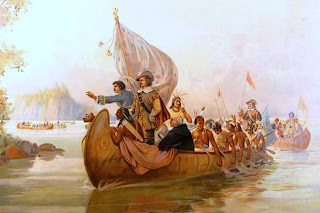 Born into a family of master mariners, Champlain, while still a young man, began exploring North America in 1603 under the guidance of François Gravé Du Pont.  In 1608, he established the French settlement that is now Quebec City.  Champlain was the first European to explore and describe the Great Lakes, and published maps of his journeys and accounts of what he learned from the natives and the French living among the Natives. He formed relationships with local Montagnais and Innu and later with others farther west (Ottawa River, Lake Nipissing, or Georgian Bay), with Algonquin and with Huron Wendat, and agreed to provide assistance in their wars against the Iroquois.

In 1620, Louis XIII ordered Champlain to cease exploration, return to Quebec, and devote himself to the administration of the country.  In every way but formal title, Samuel de Champlain served as Governor of New France, a title that may have been formally unavailable to him due to his non-noble status.  He established trading companies that sent goods, primarily fur, to France, and oversaw the growth of New France in the St. Lawrence River valley until his death in 1635.

Seigneur
A person who owned a seigneury, which was a large area of land given to someone by the King of France. 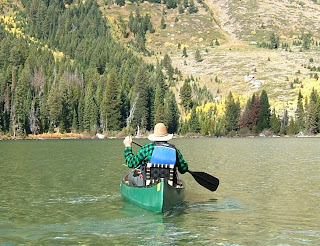 Voyageurs
A person, European or Aborigianal, who transported furs, by canoe, to and from fur posts. The word is sometimes used for coureurs de bois. 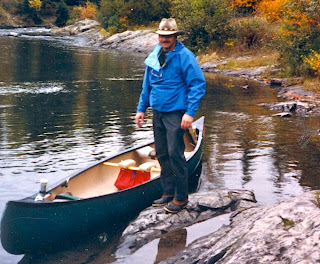 For my canoeing adventures see: "Fishing and Canoeing Tales"… http://a-drifting-cowboy.blogspot.com/2012/12/fishing-and-canoeing-tales.html

Posted by Drifting Cowboy at 4:17 PM