Was Cousin Daniel A Potawatomi Chief?

The following excerpt is from the writings of Susan Sleeper-Smith, associate professor of history at Michigan State University, and coeditor of New Faces of the Fur Trade: Selected Papers of the Seventh North American Fur Trade Conference. Information gathered for her book, Indian Women and French Men: Rethinking Cultural Encounter in the Western Great Lakes, was from thorough research of the Michigan historical societies and old documented church records for accurate historical preservation.  See source http://www.wiskigeamatyuk.com/Joseph_and_Madeleine_Bertrand.htm

Today's misunderstanding of Madeline Bertrand's origin has been traced to the late 1880s and early 1890s.  Some very old local residents of Bertrand were interviewed in these early accounts.  These interviews were known to be the origin of confusion of her being a daughter of Chief Topinabee.  After these accounts, it was known to have spun out of control as many writers interested in the Bertrand family have copied and continued the false documentation and reports of Chief Topinabee as the father of Madeline.

It is believed that many of the great Bertrand descendants have romanticized the idea of their great relative, Madeline Bertrand, being the biological daughter of the Principal Potawatomi Chief Topinabee making her a fantasized "Indian Princess", a European term.  Within this romanticized fantasy, tales of her life have even stated she chose to live within the dwelling of a teepee or wigwam, established behind the log cabin belonging to her husband and family, rather than live within her family's cabin itself.

Stories such as this have been created based on theory or pure imagination to add fantasy and create a little more Indian folklore to the life of Madeline Bertrand. Even two plaques were born and established in tribute of this rumored and romanticized biological kinship of both the Chief and Madeline within the Niles of Michigan. These plaques along with Madeline Bertrand Park were established in 1985-1986 when the rumor was in full speed. However, one of the plaques was noted without confidence stating: "Madeline, said to be the daughter of Potawatomi Chief Topenebee." This plaque contradicts the Bertrand plaque which continues the rumored tale that Madeline was the daughter of Chief Topinabee. On Madeline Bertrand's plaque, she is noted as "said to be". On Bertrand's plaque she is noted as "the daughter of". Obviously not enough research was done before these plaques were created and established in 1985-1986. But Madeline being the daughter of the Principal Potawatomi Chief would give for a much more exciting story people love to hear.

Unfortunately, the documented facts show this is clearly false. Madeline's own son, Benjamin Bertrand, stated that his mother was Madeline Bourassa, daughter of Daniel Bourassa. This information came directly from her flesh and blood, not thru rumors created generations later."

But, Native American Oral Tradition Says He Was Topinabee

Then again there is an equally compelling argument, based on oral tradition, passed down by Daniel's descendants, members of the Potawatomi tribe, who insist he was Chief Topinabee.

The following excerpt is from an October 1986 article in the How-Ni-Kan (Vol. 8, No. 10) titled "The French Connection," published by the Citizen Band Potawatomi Tribe in Tecumseh, Oklahoma.  See source http://www.potawatomi.org/pubinfo/HowNiKan/Volume08No101986.pdf

Their son, Daniel, and the principal chief of the Potawatomi, Topinabee, appear to be one and the same, and Daniel's daughter, Magdelene Bourassa, is referred to as Topinabee's daughter. 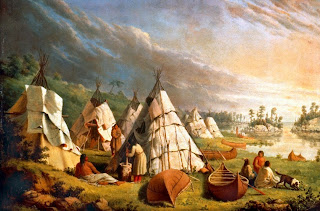 In 1818 she married Joseph Bertrand, a prominent fur trader who flourished in the St. Joseph area, and who took his furs to Mackinac.

He is listed as a trader in the American Fur Company records for 1817 and was undoubtedly associated with the earlier Mackinac Company."

Daniel Bourassa is my 2nd cousin 6x removed -- our connection looks like this:

Genealogy of my Bourassa Family in Canada and the United States

Francois signed on as a Coureur De Bois to go to Fort Michilimackinac -- a French fort and trading post located along the southern shore of the strategic Straits of Mackinac connecting Lake Huron and Lake Michigan -- in 1690, but did not return in the fall 1691 as planned.

What happened to Francois was unknown.  Marie believed her husband was dead and she was referred to as a widow in September 1693.  But Francois returned safe and sound in 1694.  Francois died in Montrèal, Quebec, Canada, on 9 May 1708; he was 49.

In the early decades of the 18th century the merchants in the English colonies were paying on the average twice the French price for beaver pelts. Tempted by these profits, René Bourassa, dit La Ronde, ventured into the extensive illicit trade between Montreal and Albany, New York. He was caught, however, and in July 1722 fined 500 livres.

By 1726 he had entered the western trade, which his father had followed over 30 years earlier. In partnership with Nicolas Sarrazin and François Lefebvre Duplessis Faber, Bourassa dispatched canoes to the pays d’en haut in 1726. The following year he traded to Baie-des-Puants (Green Bay, Wis.), where Duplessis was commandant. Although his main focus was the western trade, in March 1729 Bourassa carried letters to New England, a trip which was often cover for illegal trade. By 1735 he was connected with business associates of Pierre Gaultier de Varennes et de La Vérendrye. In that year Bourassa hiredengagés to go to La Vérendrye’s posts at Fort Saint-Charles (on Lake of the Woods) and Fort Maurepas (a few miles above the mouth of the Red River). He himself was at Saint-Joseph (Niles, Mich.) in July but wintered with the explorer at Saint-Charles. Early in June 1736 Bourassa and four others set out for Michilimackinac (Mackinaw City, Mich.). Suddenly they were captured by some 100 Prairie Sioux warriors, who claimed the French were arming their enemies. The war party was preparing to burn Bourassa at the stake when his Sioux slave girl dramatically pleaded for his life and he was released. He and his men subsequently escaped empty-handed to Michilimackinac, but the Sioux ambushed Jean-Baptiste Gaultier de La Vérendrye’s party, which was following some miles behind, and killed its 21 members.
Bourassa returned to the west in the late fall. Ignoring the elder La Vérendrye’s directive to join him at Fort Saint-Charles, Bourassa and Laurent-Eustache Gamelin, dit Châteauvieux, constructed a post at Vermilion (near the mouth of the Vermilion River, Minn.) and wintered there with a number of Ojibwas. In the spring of 1737 Bourassa went east to Michilimackinac.

After 1737 his trade appears to have centred around that post. He sold 45 pots of wine to Pierre-Joseph Céloron de Blainville for the French and Indians going south to fight the Chickasaws in 1739 and in subsequent years he sold goods used in negotiations with various tribes. Despite unsettled conditions throughout the west, Bourassa moved his family to Michilimackinac during the 1740s. He became a prominent member of the small trading community, owning one of its 40 houses, another lot in the fort, and a meadow outside. A number of slaves helped manage his properties. By the late 1740s Bourassa was apparently semi-retired, and his business was handled primarily by his sons René and Ignace. He had an active social life, attending numerous baptisms and weddings. Marriage ties linked him to other prominent families in the fort. In 1744 his son René had married the daughter of Jean-Baptiste Chevalier and in 1754 his daughter Charlotte-Ambroisine married Charles-Michel Mouet de Langlade.

When Ojibwas organized by Minweweh captured Michilimackinac from the British garrison in 1763 Bourassa must have been apprehensive. The Indians disliked him and they killed all his horses and cows before the British returned in September 1764. Perhaps this disaster prompted his return to Montreal, for even though he apparently got along well with the new commandant, William Howard (who called him a man of “good character”), he soon left Michilimackinac. His son Ignace, however, continued trading there until 1775. René Bourassa’s remaining years were spent in Montreal, where he died in 1778.

I'm still studying this one, so let me know what your research reveals.


Posted by Drifting Cowboy at 5:04 PM