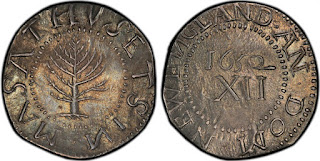 Joseph settled in Lynn, Massachusetts by 1643, arriving as a widower.

On March 6, 1646, he was awarded the first patent in North America by the General Court of Massachusetts, for making scythes. This basic scythe design remained in use for over 300 years.

In 1654 he built the first fire engine in North America, commissioned by the city of Boston. The site of the Jenckes forge is at the Saugus Iron Works National Historic Site.

In 1652, Massachusetts was short of coinage for use in its internal commerce.  It decided to coin its own money, despite the fact that the English Policy, at least unofficially,prohibited the colonists from coining their own money.

Joseph Jenks Sr was chosen to make the dies for striking the coins.  He made dies for threepenny pieces, sixpenny pieces and shillings.

They were to be of sterling silver, and by weight were to have five-sixths of the silver weight of the corresponding English coins.  This lesser weight would tend to prevent their export from the colony for their silver value.

Each was stamped with "Massachussetts" and a pine tree on one side, and on the other side "New England, Anno 1652," together with the number of pence in Roman numerals. There is a story that Sir Thomas Temple, representing the interest of the Massachussetts Bay Colony,showed samples of the coins to King Charles II.

When the King asked what kind of tree was represented on the coins, Sir Thomas answered that it was a royal oak tree, the tree which saved the King's life. The King answered that the colonists were "a set of honest dogs," and proceeded with the business at hand.

Our descendancy from Joseph is as follows:

Posted by Drifting Cowboy at 11:14 AM