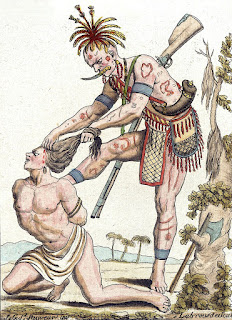 In an excerpt from the biography of Jean de Saint-Pére in the "Dictionary of Canadian Biography," 1966–2015 University of Toronto, we find the following account of the murder of my 9th great grandfather Nicolas Godé:

"This Man who had as solid a piety, as alert a mind, and in general… as excellent a judgment as have ever been known here [at Montreal] met with a tragic end on 25 Oct. 1657.

For a short time there had been peace between the French and the Iroquois.  A group of Oneidas [one of the five founding nations of the Iroquois Confederacy] appeared on the land of Nicolas Godé, who, together with his son-in-law Jean de Saint-Père and their servant Jacques Noël, was busy building a house.

The Frenchmen received the visitors most courteously, and even gave them a meal.

The Iroquois, who had come under the guise of peace and friendship, but with treacherous intent, waited until their hosts had climbed back again onto the roof and were within range of their arquebuses (1); they then “brought them down like sparrows.”

To complete their work, the Oneidas scalped Godé and Noël, but cut off Saint-Père’s head and carried it off “in order to have his fine growth of hair.”

I am descended from Nicolas Godé as follows:


More of my French-Canadian ancestors killed by Iroquois included

In 1682, Marguerite Perras dit Fontaine [8ggm], age 16, married Pierre Poupart [8ggf], who had come to Quebec as a domestic for Pierre Gagnon and later bought a farm at Saint-Lambert. Pierre and Marguerite had seven children before Pierre was killed by the Iroquois at age 40 in 1699 and Marie married a second time to Joseph Boyer.

Denise Lemaitre Perras [9ggm] was killed at age 55 by the Iroquois at Cote-Saint-Lambert on October 29, 1691, when a group of Dutch and Indian fighters led by Major Peter Schuyler of New England struck the French in reprisal for the French attack on Schenectady.

Ironically, Denise’ granddaughter Marguerite, the daughter of Pierre Poupart and Marguerite Perras, was also killed by the Iroquois as an eleven year old at LaPrairie in 1696.


(1) The arquebus is an early muzzle-loaded firearm used in the 15th to 17th centuries. 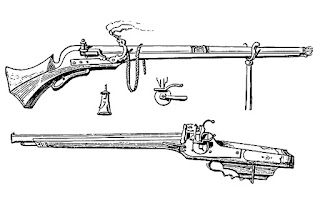