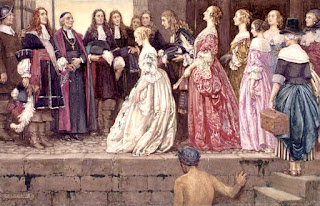 The King's Daughters (French: filles du roi), refers to the approximately 800 young French women who immigrated to New France (Canada) between 1663 and 1673 as part of a program sponsored by Louis XIV of France.

Many of these young French women were orphans whose transportation to New France was paid for by the King.  Some were given a royal gift of a dowry of 50 livres for their marriage to one of the many unmarried male colonists in Canada.  These gifts are reflected in some of the marriage contracts entered into by the filles du roi at the time of their first marriages.

In the 1660s, New France was a man's world: a colony of soldiers, fur traders, and priests.  It had little to offer women.  The population growth in the competing English colonies awakened concern among some French officials about their ability to maintain their claim in the New World.

The filles du roi program was designed to promote the settlement of New France.  Some 737 of these women married and the resultant population explosion gave rise to the success of the colony.  Most of the millions of people of French-Canadian descent today, both in Quebec, the rest of Canada and the USA, are descendants of one or more of these courageous women of the 17th century. 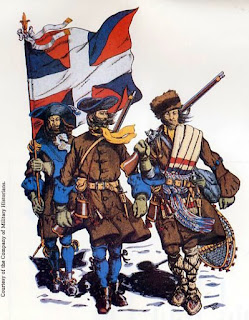 Many French Canadian descendants also have one or more ancestors who served in the Carignan-Salières Regiment.

The regiment was formed between 1665 and 1668 to combat the Iroquois threat to the struggling colony of New France.  Over 400 of its soldiers and officers decided to remain in New France when the regiment was recalled to France.

Many of These Carignan soldiers married King's Daughters (filles du roi), and became the original French-Canadian ancestors from the Quebec province.

Anne Le Ber (1647 - 1732), my 7th great grandmother, was a King's Daughter who married François Pinsonneau Dit Lafleur, a soldier in the Carignan-Salières Regiment on 1 May 1673 at St-Ours, Sorel, Quebec.

I am  descended from them as follows: