Great Granddad was a member of the Traite de Tadoussac 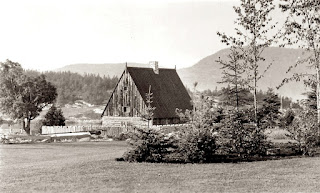 Denys (Denis) was born in Normandie France about 1605. He was the son of Joseph Duquette and Jeanne Barbie. His surname was written as Duquay on his marriage certificate in 1638.

He had immigrated from France to Canada around the year 1633.

He married Catherine Gauthier (Gautier) 13 May 1638 in Notre Dame, Quebec (Nobelman Pierre Legardeur and M. Noel Jucherau were witnesses). Catherine was just 13 at the time of her marriage, but they had been married for 37 years, at the time of his death in 1675. Catherine Gautier was born Abt. 1627 in Paris, France; she died 03 August 1702 in Canada. She was the daughter of Phillipe Gautier (Gauthier) and Marie Pichon (Plichon).

1659: As a young man Denis Duquet became a wealthy fur trader. He became a member of the "Traite de Tadoussac" (1) the first fur-trading post in European North America (established in 1600, eight years before the founding of Québec City).  The Traite de Tadoussac was the embarkation warehouse and trading post from which the furs were sent to France.

Denis was noted in the records to be the brother in law or beau-frere, of two presidents of the Societe des Habitants.

1660: Denis was named an Honorable Gentleman.

1667 census for Cote de Lauzon: Denis 55, Catherine 42, Pierre la Chesnais, notary, 25, Francoise 23, Agnes 19, Jean Desrochers 16, Rosalie 14, Louis 10, Philippe 8, Antoine 6, Catherine 5, Joseph 3. Domestic Servants: Simon Duval (no age given) and Claude 17. Property: 8 beasts and 30 arpents cultivated land.
27 November 1675: From the Parish of Notre-Dame Quebec: 27 November 1675, Denis Duquet, a resident of the coast of Lauzon, died at the age of seventy years. He was living in the hospital of Quebec, and died after having received the Holy Sacraments of Last Communion and Extreme Unction.


(1) Tadoussac was founded in 1600 by François Gravé Du Pont, a merchant, and Pierre de Chauvin de Tonnetuit, a captain of the French Royal Navy, when they acquired a fur trade monopoly from King Henry IV. Gravé and Chauvin built the settlement on the shore at the mouth of the Saguenay River, at its confluence with the St. Lawrence, to profit from its location. But the frontier was harsh and only five of the 16 men with them survived the first winter. In 1603, the tabagie or "feast" of Tadoussac reunited Gravé with Samuel de Champlain and with the Montagnais, the Algonquins, and the Etchimins."

Tadoussac (French pronunciation [tadusak]) is a village in Quebec, Canada, at the confluence of the Saguenay and Saint Lawrence rivers. Established at an Innu settlement, it was France's first trading post on the mainland of New France. By the 17th century it became an important trading post and was the oldest continuously inhabited European settlement in Canada, and the oldest surviving French settlement in the Americas.
The indigenous Innu called the place Totouskak (plural for totouswk or totochak) meaning "bosom", probably in reference to the two round and sandy hills located on the west side of the village. According to other interpretations, it could also mean "place of lobsters", or "place where the ice is broken" (from the Innu shashuko).
Although located in Innu territory, the post was also frequented by the Mi'kmaq people in the second half of the 16th century, who called it Gtatosag ("among the rocks"). Alternate spellings of Tadoussac over the centuries included Tadousac (17th and 18th centuries), Tadoussak, and Thadoyzeau (1550)

My Lineage from Denis Duquet:

Posted by Drifting Cowboy at 2:53 PM