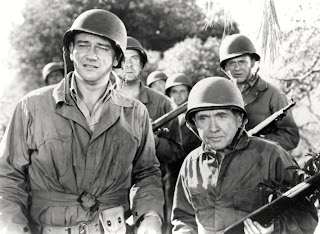 The Fighting Seabees (1944) starring John Wayne, Susan Hayward and Dennis O'Keefe is a highly fictionalized interpretation of the events that led to the creation of the U.S. Navy's "Seabees" during World War II. 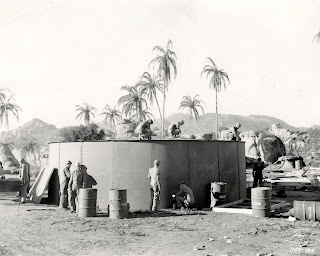 The film -- one of the finest ever created at Republic Pictures -- was directed by Edward Ludwig, and features some of the most impressive outdoor camera footage ever lensed at Chatsworth's Iverson Ranch. 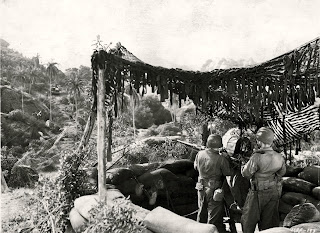 Wedge Donovan (John Wayne) and his civilian construction workers are constructing airfields for the U.S. Navy in the Pacific during World War II.  A conflict arrises when Donovan's crews discover they are not allowed to arm, and defend themselves against Japanese attacks.

Donovan and his workers take matters into their own hands, and unknowingly thwart a trap the Navy had prepared for the Japanese.  As a result many of Donovan's crew die needlessly.  This causes further conflict with Lieutenant Commander Robert Yarrow (Dennis O'Keefe).

Following the tragedy-- and loss of Donovan's men -- Yarrow and Donovan work together to convince the Navy to form Construction Battalions with formal military training.

Later -- on another Pacific island -- Yarrow and Donovan team up to defend against a major Japanese attack.  The Seabee's even resort to the use of bulldozers to ward off the attack, and when Japanese reinforcements are about to overrun their position Donovan rams a bulldozer into a fuel storage tank that erupts into flame flooding burning fuel onto enemy troops. 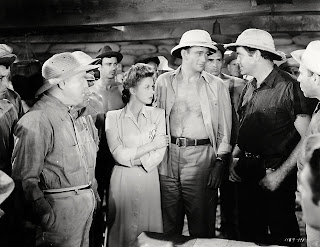 The movie is literally a tour of the Iverson Ranch... 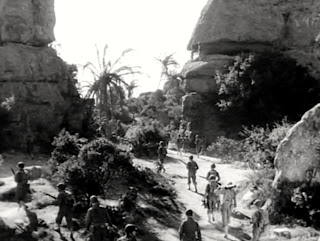 The Fighting Seabees marching through the Garden of the Gods. 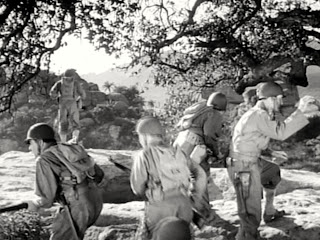 The Fighting Seabees dig in to do battle on Nyoka Summit. 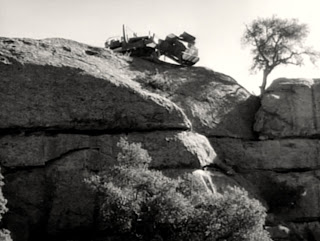 The Fighting Seabees use a bulldozer to push a Japanese tank over Nyoka Cliff. 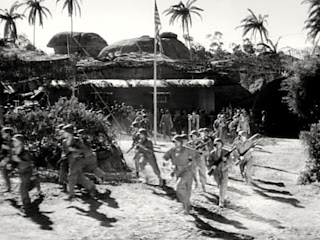 The Fighting Seabees march past a base camp in Indian Hills (Hook Rock in the background). 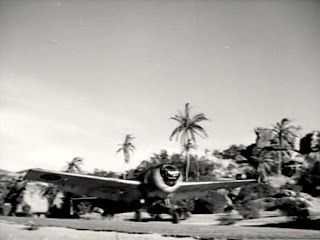 The insert road on the upper ranch (with Eagle Beak in the background) becomes an airstrip created by the Fighting Seabees.

So if -- like me -- you are a fan of Iverson Ranch movies this one is an absolute must see.

Posted by Drifting Cowboy at 8:27 AM