Meanwhile back at the ranch -- Grove Cabin 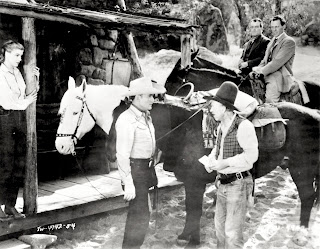 In an earlier post I described 'The Grove' that bordered the southern edge of Indian Hills.  What's left of that grove is located on private property south of the present day Indian Hills Mobile Home Village.  Just off the main chase road that ran through the grove sat a small stone cabin that was partially secluded behind Pear Rock.

In the still above from a scene in Arizona Territory (1950) you can get a glimpse of the cabin's front porch. 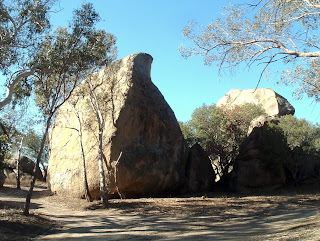 The Grove Cabin bit the dust long ago, but there are still some iron fittings clinging to Pear Rock (above left) that once anchored the cabin in position.  The chase road circled around Pear Rock in such a manner that is was possible to film action next the boulder without seeing the cabin hidden behind it. 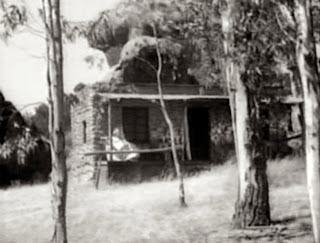 The Grove Cabin made an appearance in Wild Bill Elliott's The Taming of the West (1939) as a flat roofed shack as you can see the the screen capture above.  I've often wondered if the cabin wasn't a remnant from the Wee Willie Winkie sets constructed in 1937. 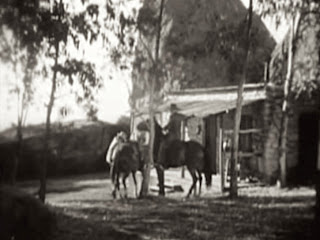 In the above screenshot from a scene in Johnny Mack Brown's Pony Post (1940) we can see the roof is still flat, and we get a good look at Pear Rock to the east. 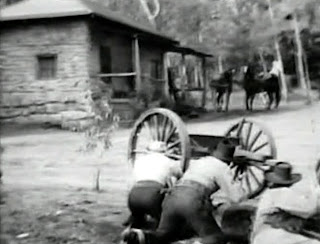 By 1942, when the cabin appeared in Prairie Gunsmoke (1942) (screenshot above) the roof had been improved to a sloping hip roof. 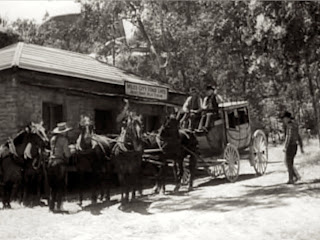 Even tho there was a stagecoach relay station in another section of the grove, the Grove Cabin was also used as a relay station on occasion as you see here in a screen capture from Cheyenne Wildcat (1944). 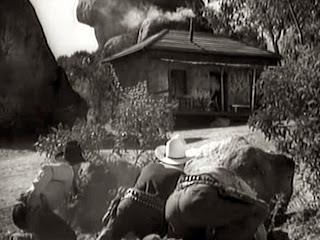 The capture above from Bells of Rosarita (1945) (starring Roy Rogers) gives you a good look at the front of the cabin.  A portion of Pear Rock can be seen on the left and the stacked rock is seen at the rear. 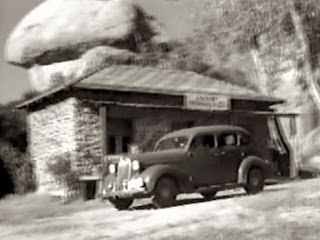 The screenshot above from the Republic serial Blackhawk: Fearless Champion of Freedom (1952) gives us a better look at the stacked rock behind the cabin on the west side. 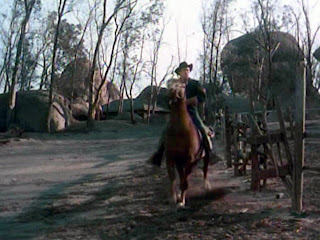 In this color screen capture from Wild Stallion (1952) the camera (located at the south end of the Western Street) is facing south and catches a glimpse of the Grove Cabin located in the trees south of town.

Posted by Drifting Cowboy at 7:56 AM