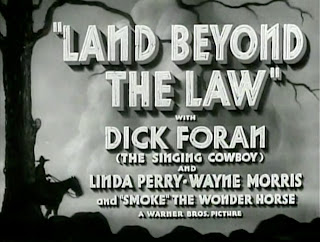 In the late 1930's Warner Bros. responded to Republic's new singing cowboy sensation --Gene Autry -- by signing their own sagebrush troubador -- Dick Foran -- to do a series of top quality B-Westerns.

The camera work and second unit stunts from Warner Bros. was second to none resulting in some of the best Westerns ever created.  In my opinion Land Beyond the Law (1937) was the best of the Dick Foran series.
Plot: 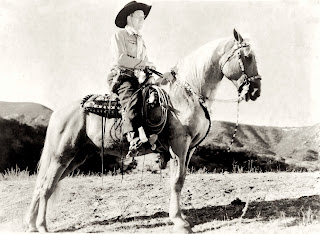 Chip Douglas (Dick Foran) is a wild and wooly young cowman who rides for Slade Henaberry cattle baron and owner of the Circle Bar Ranch.  Chip and his pals Dave Massey (Wayne Morris) and "Bandy" Malarkey (Glenn Strange) are unaware that Henaberry's cow hands are mostly cattle rustlers and murderers. 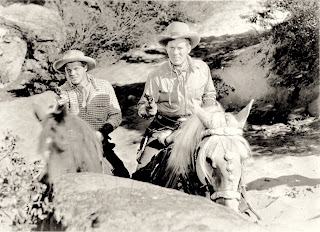 Chip is at odds with his father John Douglas Sr. (Tom Brower) -- a salty old rancher -- because his father dislikes Henaberry and his bunch. 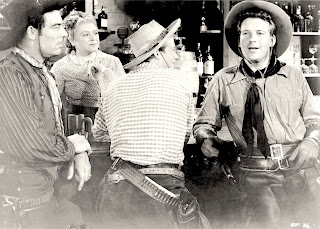 Chip's father is murdered by Henaberry's gang -- headed by Tascosa (Harry Woods), Mason (Edmund Cobb) and Kirby (Henry Otho) -- when he tries to stop them from rustling his cattle. 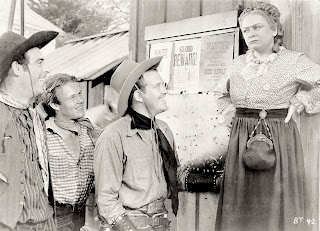 After his father's murder Chip is appointed sheriff based on the recommendation of Cattle Kate Turner (Irene Franklin) who owns the local saloon and hotel. 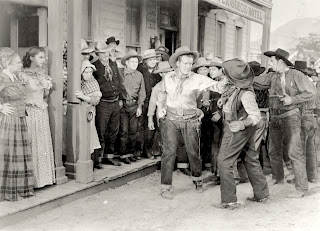 For an Iverson Movie Location Ranch history buff it doesn't get any better than this film.  It features some of the best scenes ever lensed on the lower ranch.

Posted by Drifting Cowboy at 11:02 PM