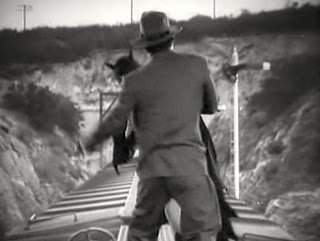 In my previous post I told you about the 537 foot tunnel 28 that runs under Topanga Canyon Boulevard today, but I forgot to include the screen capture (above) taken from a scene Batman and Robin (1949). 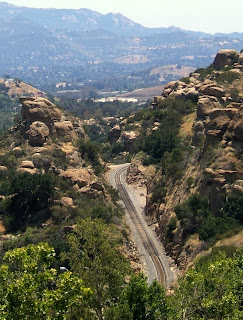 After leaving tunnel 28 on a northbound train the next often filmed feature is the Chatsworth Railroad Cut located between tunnels 27 and 28.  This color photo was taken from the Iverson Ranch in 2009. 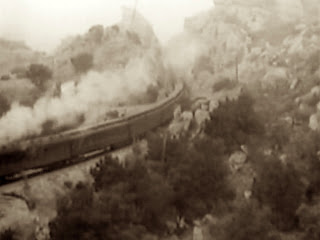 The screenshot (above) is the Chatsworth Railroad Cut in a scene near the end of John Wayne's The Trail Beyond (1934).  Sorry, but these captures from old film are a little fuzzier than most :( 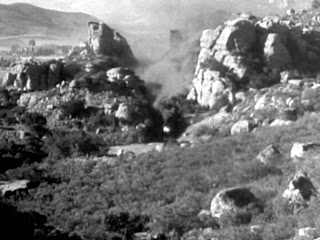 Above is a little clearer screen capture of the Chatsworth Railroad Cut as seen in the opening scenes of John Ford's Wee Willie Winkie (1937). 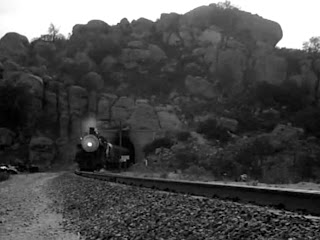 The capture above is from a scene in Ma and Pa Kettle on the Farm (1951) and shows a steam locomotive exiting the 934 foot Tunnel 27 (the middle tunnel). 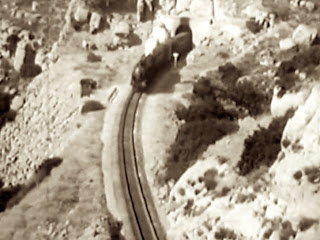 This final screenshot shows a locomotive exiting the 7369 foot Tunnel 26 in a scene from The Trail Beyond (1934).  At the time tunnel 26 was completed it was the longest railroad tunnel in the United States. 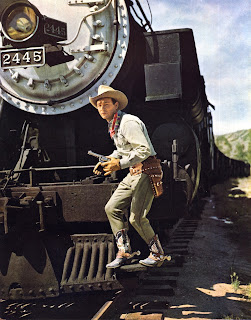 (Photo of Roy Rogers above courtesy of Bruce Hickey) That wraps up my Chatsworth Trains posts, so until next time…  Happy Trails.  Stay tuned…

Posted by Drifting Cowboy at 7:50 AM