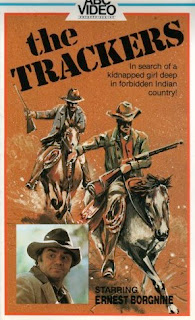 Ernest Borgnine (1917-2012) passed away yesterday.  May he RIP.  Ernest Borgnine was an oscar winning American actor that appeared in more than 100 film and TV titles over a fifty year span.

He made one television movie with Santa Susana location credits:

The Trackers (1971) (TV) - Sammy Davis Jr., Ernest Borgnine and Julie Adams (Iverson Ranch) Aaron Spelling Prod and ABC.  The story about rancher who finds that his son murdered learns his daughter has been kidnapped by outlaws.   He hires a professional tracker (known to get his man) to help him trail the bad guys and save his daughter.