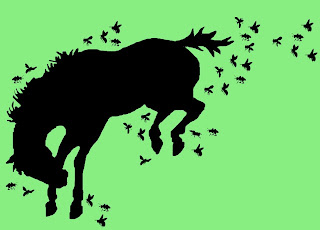 Supposedly an old farmer once said, "A bumble bee is considerably faster than a John Deere tractor."  I honestly don't know it that's a true fact, but I can tell you that avoiding bees while on horseback is a good idea.

Fact is we've got a bunch of critters worth avoiding in the Santa Susana Mountains -- rattlesnakes and mountain lions are also among them, but bees top my list.

I have lots of experience with bees -- none of it is good.

We've got at least three kinds of bees to deal with on our mountain trails… honey bees,  digger bees, and meat bees.  Actually I'm told some of them are really wasps, but if they're black and yellow folks still call 'em bees.

The worst of the lot -- for my money -- is the ordinary honey bee.  Until about a dozen years back you didn't need to worry much about honey bees, but then those Africanize bees that escaped from Brazil hit California and things changed.

Three years back 19 of my pals and I were on a trail ride, and just as we came through a narrow canyon we happened on a hive of bees in a dead tree.  I can tell you that bees -- especially the africanized version -- aren't real found of noise.  Our group is a right friendly mix of males and females, and all were engaged in friendly palaver, so many of the jolly riders didn't even notice the bees.

Then all of a sudden I heard a scream!  I turned around to see what was happening.  It was quite a sight -- at least two horses and riders were on the ground, other horses were bucking, and just about every rider was swattin' bees.

About this time some words of cowboy wisdom came to mind -- if you're ever attacked by bees -- RUN!

This was no time for chivalry, and being near the lead, I spurred ol' Zinger into a gallop and we split the breeze.

I took about 20 minutes for all the riders behind me the catchup, and just about every horse and rider got stung multiple times.

My wife Joyce was pretty far behind me and she her pony each got stung more than a dozen times.

Another bee worth avoiding is a wasp folks call 'digger' or 'miner' bees.  They build their nests in little shallow holes in the ground.

Livin' in rattlesnake country I've trained myself to scan the trail about 30 feet ahead of my horse.  One spring day about five years ago I noticed the ground was a darker shade of brown a few feet in front of my wife who was riding ahead of me.  Stop! I yelled, and then rode past her to see why the ground had changed color.  I was amazed.  Every few inches there was a freshly dug hole about the diameter of a pencil and each hole had a drab colored bee in it.

After identifying the cause of the dirt color change we quietly skated around the bees, and rode away.  I did a little research and learned that digger bees aren't likely to attack if you don't step on them.

You can bet I keep my eyes pealed for darker dirt on trials in the spring -- cause I sure plan to avoid steppin' on 'em.

The third kind of bee in our area is another wasp that's commonly called a 'meat' bee.  I read they are called that because they are attracted to meat.

They also like Coca Cola -- I know from personal experience -- and I've learned it's a good idea to look into your soda before drunkin'.  Especially when you know these little rascals are in the territory.

I know a group of riders that got into bunch meat bees that were dining on a dead ground squirrel.  They sure had a giant wreck before they could get clear of the vicinity.

So, a bee might be faster than a John Deere tractor, but a galloping horse can our run them is less than a quarter mile.  Better yet if you spot a bunch of bees on the trail ahead -- it's a good idea to ride around 'em.
Posted by Drifting Cowboy at 9:05 AM