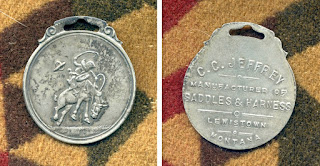 I recently acquired this delightful C. C. Jeffrey Saddle-Makers Watch Fob (above).  The thing that got me excited about buying this fob is the bucking horse (bronco) design.  When I first saw it I was reminded of the art of Charles M.  Russell -- one of my heroes -- and after doing a little research I'm convinced that Russell's art influenced the maker of the watch fob. 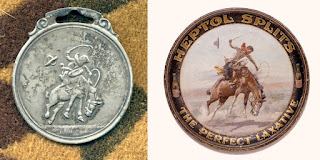 Compare the Jeffrey watch fob on the left to the Charlie Russell illustration on the 'Heptol Splits' advertising tray on the right.  I wonder if this could be a rare and unknown piece of Charles M. Russell advertising art?  What do you think?

Christopher C. Jeffrey is the son of Robert Jeffrey who was born in Edinburgh, Scotland, and grew to young manhood in his native land.  Before leaving home in search of larger opportunities he was united in marriage to Mary Carruthers, a bonnie Scotch lass who feared not the unknown dangers of the new world.  Together they came to America.  Together they came to the United States but soon decided that they might feel more at home if still on English soil, so they shortly moved to Canada where they remained British subjects to the end of their lives.  In Canada they purchased them a small farm where they passed the remainder of their days in comparative comfort.  Mr.  Jeffrey cared for his farm in person almost until the last.  He passed away in 1892 at the good old age of seventy-six.  His wife, although the mother of ten children, outlived her husband by almost thirteen years.  In 1905 she was laid to rest at his side.  A long deserved rest was hers.  She had endured hardship and privation smilingly and reared her ten children in wholesome fear of her Scotch Presbyterian God.  For eighty years was she spared to labor for her family on this earth.  Mr.  and Mrs.  Jeffrey, with their native caution, progressed slowly, but every step of their lives was toward progress.

Of their ten sturdy offsprings— and where can there be found better stock for the building of a new land— of these children Christopher C. Jeffrey was the second from the youngest.  He was born in New York City shortlyafter the arrival of his parents from Scotland, the date of his birth being July the eighth, _ 1858.  Scarcely was he a year of age, however, when his parents moved to Canada, their future home.  Here their son lived upon the home farm until his twenty-first year, when, desiring to set out for himself, he went to Lincoln, Nebraska.  When only thirteen years of age, his father, with the old world valuation of a good trade, had apprenticed him to a harness maker so that he did not start out in life altogether empty handed.  Through his four years' apprenticeship at Mount Forest, Canada, he had received for his labors the total sum of $160.  This to a youth of American parents would have seemed ridiculously small, but an American young man, on the other hand, would probably have started out with neither the good trade to depend upon nor the $160 of his own earnings to carry him to his journey's end.  For nearly fifteen years Mr.  Jeffrey labored at his trade in Nebraska.  In 1895, having accumulated a competence, he left Nebraska for Lewistown, Montana.  Here he opened up a large harness and saddlery house and has carried on a flourishing business ever since.

Before leaving Nebraska he chose for his life companion Miss Hattie Cheney, the daughter of Mr.  and Mrs.  William Cheney, of Princeton, Nebraska.  They were joined in marriage at that place on the eighth day of November, 1891.  Mr.  and Mrs.  Jeffrey are now the parents of two grown children.  Bert Jeffrey, the son, is with his father in business.  He still makes his home with his parents.  His sister, Gladys Jeffrey Lefler, is the wife of Mr.  Arthur Lefler, who conducts a pool hall with a cigar business attached.

Mr.  Christopher Jeffrey has been able to devote few years of his life to the obtaining of book knowledge, but with the shrewdness and determination inherited from his old Scotch father, he has won for himself a kind of education that schooling often fails to give.  The Presbyterian teachings of his parents cause him to still lean toward that denomination.  In this preference Mrs.  Jeffrey joins him.  Both of them are most devoted to Lewistown and Montana, believing that they are excelled by no sister town or state.

Mr.  Jeffrey is a member of the Red Men lodge and most active in his service to the Yoemen, having filled nearly every office it was in their power to confer upon him.  Politically he votes the Democratic ticket, although he feels no personal interest in politics.  He is a great reader and keeps well informed on the questions of the day, however.  His infrequent vacations are spent in the open, fishing being his favorite sport.  His spare evenings are given over to the theater or to some musical entertainment, both he and Mrs.  Jeffrey very much enjoying these diversions and being quite musical themselves.  Montana has brought them prosperity and they, in return, give to her a loyalty that can not be exceeded by her native sons and daughters.

I'd dearly love to learn more about Christopher C. Jeffrey and his saddles.  If anyone has any more information or one of his saddles I'd appreciate hearing from you.


"Cowpunchers were mighty particular about their rig, an' in all the camps you'd find a fashion leader. From a cowpuncher's idea, these fellers was sure good to look at, an' I tell you right now, there ain't no prettier sight for my eyes than one of those good-lookin', long-backed cowpunchers, sittin' up on a high-forked, full-stamped California saddle with a live hoss between his legs."  -- Charlie Russell

Posted by Drifting Cowboy at 7:12 AM