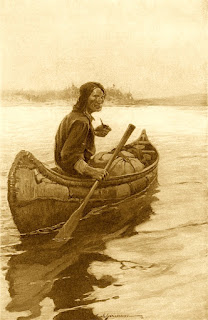 Francis and Marie had seven children, with five living to adulthood. Their daughter, Marie Bourassa [our 6th great grandmother], married Jacques Pinsonneau [our 6th great grandfather]. Francois Bourassa had two concessions of land and also a home in the village of LaPrairie but had prospered even more by being involved as a fur trader in the west.

When Francois died at age 48 in an epidemic at Montreal, Marie married a third time to Pierre Herve. Like most of the families of LaPrairie at this time, the Bourassa family watched their sons head west to make a profit in the fur trade.

Francois Bourassa’s son, Rene Bourassa [our 6th great great-uncle], is a good example of the younger men of LaPrairie at the beginning of the 18th century. In the early decades of that century, the merchants of the English colonies were paying twice as much as the French price for furs. LaPrairie, located on the south shore of the St. Lawrence, gave easy access to the English markets.

Tempted by these profits, Rene was carrying on illicit trade with the merchants in Albany and was fined 500 livres when he was caught in 1722. He was dispatching canoes to the west by 1726. In 1729 Rene carried letters to New England, a trip which was often a cover for the illegal trade.

In 1735 he hired engages to go to Pierre Gaultier de La Verendrye's posts at Fort St. Charles on Lake of the Woods and Fort Maurepas near the mouth of the Red River. 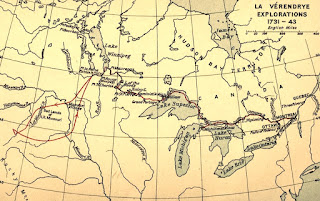 He wintered with La Verendrye at Fort St. Charles. In June, 1736 Rene set out from Fort St. Charles with four others for Michilimachinac. They were captured by Sioux warriors, who claimed the French were arming their enemies, a truth because La Verendrye was trading guns to the Assinabois who were fighting the Sioux.

The Sioux were preparing to burn Bourassa at the stake when his Sioux girl (wife?) pleaded for his life and he and his men were released. He had narrowly missed death when other Sioux on Lake of the Woods ambushed and massacred a party of 21 following close behind Rene’s party, including Jean Baptiste de La Vérendrye, La Verendrye’s son, and Father Jean-Pierre Aulneau de la Touche, for crimes against their people.

In 1736, Rene constructed a post and wintered at Vermillion (Crane Lake today), Minnesota, to trade with the Ojibwa. After that, most of his trade was around Michilimackinac, where he was selling goods to the Indians. His family had joined him there.

The Ojibwas captured the fort at Michilimackinac in 1763 and, because they disliked Rene, they killed all his cattle and horses. Soon afterwards, Rene settled in Montreal as a merchant in the fur trade.

Fathers of the Fur Trade

(1) Francois Leber and his sons were known as the fathers of the fur trade.

Most of this story is an excerpt from Minnesota, eh? a Foley/Perras Family History, by Jerry Foley, that was found online at http://fahfminn.org/books/ while researching the fur trade history of LaPrairie.