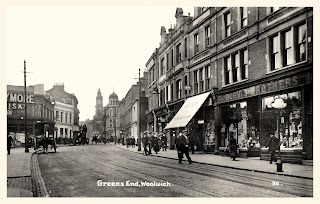 My grandfather Stephen William Head was born May 20, 1889, in southeast London in the industrial town of Woolwich.  He was the older of the two sons of Stephen John Head and Susannah Avery.  He had six older sisters  His father was the assistant foreman in the carriage department of the Royal Arsenal at Woolwich.  See: http://a-drifting-cowboy.blogspot.com/2011/11/british-legacy-four-generations-of-wood.html for additional information about Stephen John Head.  The postcard above is a photo of Woolwich, Kent, England taken about 1900. 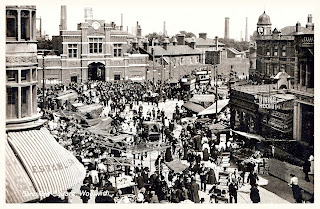 The 1905 postcard above is a photo of Beresford Square in Woolwich.  The building with the clock (left of center) is the gateway into the Royal Arsenal.  After Stephen William Head completed an apprenticeship as a joiner, he decided to immigrate to the United States in 1910 at the age of 21.  He departed Liverpool, England on the Virginian and arrived in Quebec, Quebec, Canada on July 29, 1910. 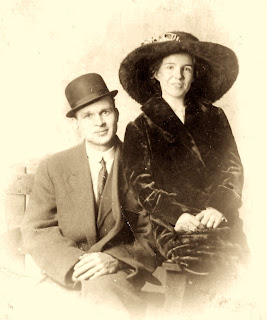 I believe granddad must have had a friend in Detroit, Michigan because he arrived there in 1910 and apparently immediately found work building houses.  Less than three years later on March 24, 1913, he married Annie Margaret McNeil, my grandmother. 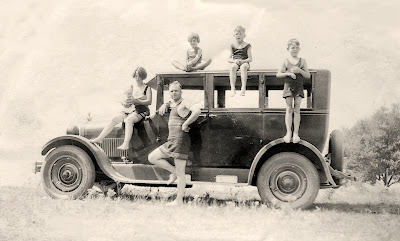 By 1925 when the photo above was taken, he had fully realized the "American Dream."  He was a successful home builder in business with his younger brother.  He could afford the fancy Rio Flying Cloud automobile in the photo.  Little did he realize that the "Great Depression" was just around the corner. 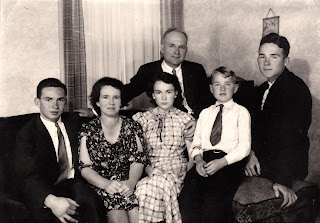 By 1936, granddad had lost his home, his business, a summer cabin, and had moved from Detroit to Alaska, to Seattle, and finally to Santa Monica, California, trying to find work to survive.  In the 1935 photo above are (left to right) Leonard (my dad), Annie (grandma), Helen, Stephen (grandfather), Robert, and Herbert.  Their lives began to stabilize in Santa Monica because both granddad and my dad had found work at Douglas Aircraft.
Granddad died in 1942, just five days before I was born.  My dad always believed the constant worry about his sisters--still in London during World War II--took its toll and caused his heart to fail at an early age.
Posted by Drifting Cowboy at 3:11 PM