It's been a little over fifteen years since the first time Sunup and I went up the Mormon Canyon trail.  Back then I boarded Sunup on a ranch situated at the junction of Browns Canyon and Mormon Canyon.  Both canyons have year-around creeks meandering through them.  The canyons are riparian habitats along the banks of the creeks and are home to a wide range of plants, insects, amphibians, and birds. 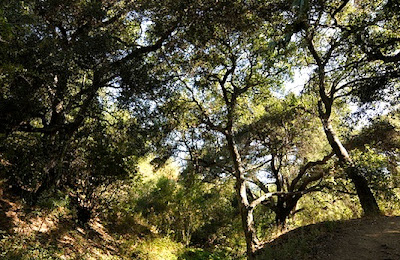 Mormon Canyon is a shaded woodland populated with sycamore, live oak, black walnut and willows.  My usual ride started on Mormon Creek, just above its confluence with Browns Wash.  the trail wound alongside of, and crossed, Mormon Creek several times in the bottom of the canyon as it headed north; then as it began its ascent to higher elevations, the trail paralleled the east side of the creek until it reached a plateau at the top of a ridge, some two and a half miles distant.

As the trail climbs through the canyon visitors are treated to glimpses of open pastures, two waterfalls (one nearly 30 feet tall), and a huge array of sandstone rock outcroppings.  The plateau at the top of Mormon Canyon is the home of a  100-year-old olive grove with a year round spring that attracts lots of wildlife, and was home to the free ranging-cattle that once had roamed the area. 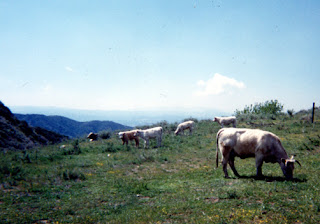 After reaching the olive grove, I generally turned to the south went across a razorback ridge, and then continued to any one of three ridges that traversed chaparral and grassland habitat back to the starting point.
Each round-trip ride of five or six miles was a new adventure because of the extraordinary variety of wildlife in the area.  There are a thousand little stories I could tell you about what I witnessed in the several years I rode those trails.  Things like…
Hearing a commotion overhead, then looking up (at treetop level) to see a red tail hawk with a snake dangling from his beak while a crow is attacking him from behind.
Galloping up the trail and almost broadsiding an unsuspecting coyote as it suddenly emerged from the chaparral on the edge of the trail.
Cresting the apex of a ridgeline and startling a gray fox in the midst of his dining on a field mouse.
Riding up a ridge at 5:30 a.m. and watching a great horned owl hunting from the branch of a dead tree, then two hours later coming down the same ridge and watching the day shift, and another red tail hawk hunting from the same branch of the same dead tree.
Rounding a bend in the trail and running head-on into a bobcat that bolts back down the trail and disappears.  Then (a few minutes later), having your horse stop dead in his tracks, swing his head around, and look squarely at the bobcat hiding in plain sight against a downed tree.
Riding down the trail, then picking up a little motion in the shadow on a pile of leaves--a very lazy rattlesnake.  There's no way around him except by getting off your horse and gently roll rocks over the top of the snake until he meanders off the trail, giving you a safe route home.
Watching a roadrunner scurry along a dusty ridge-top trail a 100 yards ahead that suddenly darts into the chaparral, only to emerge ten yards distant as a coyote.  No wonder our native American brothers believed in shapeshifters.
Looking down from a ridge top at the canyon trail and noticing three deer in a secluded little meadow I had just rode past, but never noticed.
Heading up the canyon just before dusk on a warm summer evening and stopping to rest your horse, and you happen to gaze at an open pasture through the trees and spot a fence post you never noticed before, and something about that post fixes your attention.  Then suddenly the post stands up and turns, exposing its profile with a long dark brown tail that flicks, then you realize you are way too close to a mountain lion.
On another summer night going up the trail in the dark with a group of friends and suddenly a female voice shrikes, "Stop, turn around, go back… it's a SKUNK!"
Our Chatsworth canyons and ridges are plumb full of wildlife.  You name it--if it lives in Southern California we've got it.  Even a rare black bear or two--I've seen the tracks, but not the critter, I've seen a golden eagle three times
I sure do miss riding up that trail listening to the "chiquita-chiquita" call of valley quail, the squawk of stellers jays, and the bubbling sound of the creek.  Nine out of ten times I'd make the ride and never see another human being. 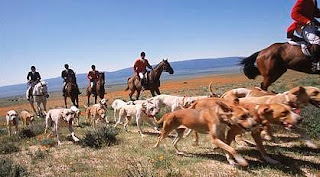 There used to be a "hunt club" located in Browns Canyon.  They moved out a couple of years back.  Most of their borders where huntsmen (and women) that rode behind a pack of hounds much as they did in jolly old England.  I really miss seeing those folks.  I remember watching them from the top of a ridge one morning.  About fifteen of them were galloping--hell bent for leather--down a mountainside behind the hounds.  Then about a half mile ahead I spotted six coyotes crossing the creek, and headed toward the ridge I was sitting on.  The coyotes really startled old Sunup as they passed us--practically under foot--to evade the hunters.  We continued along the ridge on our ride and a few minutes later yielded the trail to the hunters who were clearly losing ground.  I pointed to my back-trail, and said, "They went thataway."
Now a developer wants to bulldoze the area and build 188 homes, they'll probably let him cause the politicians want the tax money, and--I'll guaran-damn-tee you--nobody on the planning commission ever saw a bobcat or a great horned owl at 5:30 in the morning, or any other time for that matter.  I'm almost seventy and Sunup is twenty-seven.  We've had our day, but I feel sorry for my grandsons who'll never have a choice about riding or hiking in our local canyons.
Posted by Drifting Cowboy at 6:52 AM