If you can't buy a museum's treasure -- make your own 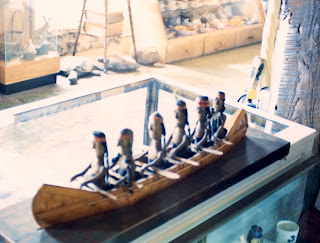 Several years back my wife and I toured eastern Canada together.  My goal was for her to experience some of the delightful sights and sounds that had drawn me to the Canadian wilderness areas where I had canoed.  I also wanted to visit Quebec and Montreal--two cities rich in fur trade and canoeing history.  We rented a car in Montreal and spent two weeks stopping at every roadside tourist attraction and antique store imaginable.
Our last stop was a rustic lodge on the shore of an alluring lake in Algonquin Park.  Here, I had hoped she would get to listen to the beautiful and haunting call of loons, and if she was really lucky, maybe hear a wolf howl off in the distance.  The canoeing gods were smiling on her and she experienced both.
Somewhere along the way during our travels on that trip, we happened to visit a small charming museum--I don't remember its name or location.  I took a photo (above) of a really nifty primitive folk art carving of a canoe full of Indians.
A few months after, armed with the photo of the primitive canoe carving, I set out to make my own version of it.  I had never done any carving before, so I bought a chunk of basswood and a dermal tool kit, and went to work.

A couple days later, I had my very own museum treasure (above).  That was many years ago, and since then I've become a much better whittler.  Yet, that first primitive folk art canoe carving still remains as one of my favorite creations. 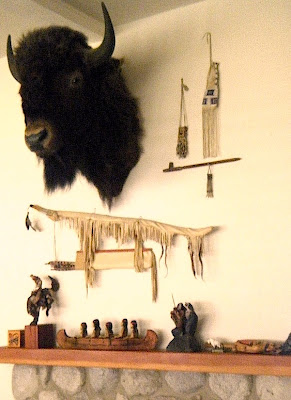 Today my little folk art canoe has a place of honor on my fireplace mantel along with some carvings created by a master carver named Barry Lysaght (aka the Topanga wood carver).
Posted by Drifting Cowboy at 6:45 AM