Joseph Jacinto "Jo" Mora (1876–1947) was an Uruguay-born American cartoonist, illustrator and cowboy, who lived with the Hopi and wrote extensively about his experiences in California. Because he was an artist-historian, sculptor, painter, photographer, illustrator, muralist and author he has been called the "Renaissance Man of the West".
I believe he is best known for his posters and maps, but he also penned two of my favorite books about cowboys and vaqueros. 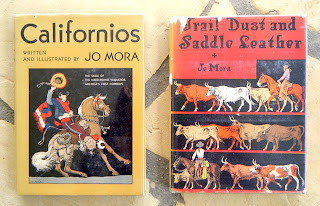 If you want to learn about early cowboys and their trappings there is no better source than Mora's book "Trail Dust and Saddle Leather".  Another book that delves into the life and times of the early California vaquero is "Californios."  I think these two books have been reprinted in recent years, and I recommend them to anyone interested in the history of the West. 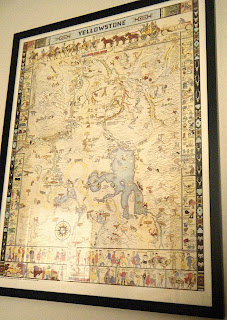 Mora also produced a huge variety of maps--he called Cartes.  I own and enjoy a reproduction of his Yellowstone map (above) that was published in the 1990s. 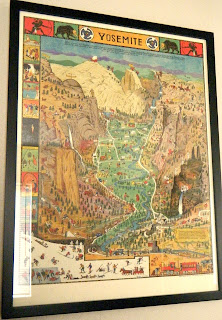 Another smaller reproduction map (still available from the Yosemite Conservancy) is his Yosemite map above.  All of his maps were originally created in the 1930s and 1940s, and the originals sell for premium prices today.
Posted by Drifting Cowboy at 9:12 AM