Dalmatians are known as the "coach dog."  In past centuries the dalmatians (especially in England) would run under the back axles of a coach and accompany horses on their travels. They acted as guards and decoration, protected the passengers, reassured the horses; and at night, they killed vermin in the stables.

The Dalmatian is an endurance dog, and its efficient trot enables it to cover long distances without tiring.  Today the British Carriage Dog Society still exists to help preserve the working heritage of the Dalmatian as a coaching dog.

Dalmatians are intelligent, energetic, and alert dogs. They are one of the easiest breeds to recognize with their black spots (sometimes liver or lemon) and bright white coat.  Dalmatians are medium-sized with an athletic build, ranging in size from 50 to 65 pounds.

The breed is one of the oldest known--perhaps 4000 years old-- and is believed to have originated in Dalmatia, where they were used as dogs of war, guarding the borders of Dalmatia.


The use of Dalmatians as carriage dogs was transferred to horse-drawn fire engines, so the Dalmatian is also sometimes known the firehouse dog in the United States. 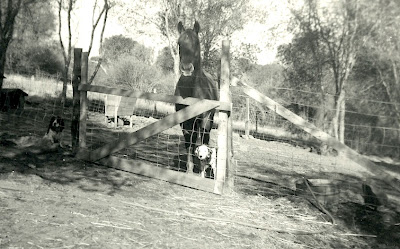 Dad brought home a Dalmatian pup just before we moved to Oakhurst in 1957, and ever since then I've had Dalmatians in my life. (above) This basket of pups arrived about 1980.  They were litter-mates.  Chip (left) was liver spotted and Dottie (right) had the traditional black spots.  The were with us for fifteen years. 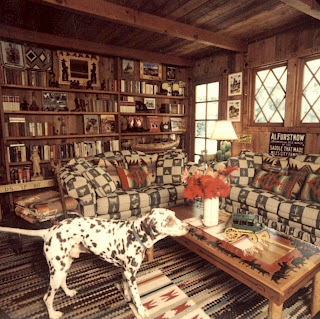 (above) Chip, my only liver colored Dalmatian, was photographed by a Home Magazine photographer and almost made it into a 1992 article about Lure of the Dim Trails and my cowboy chic furniture. 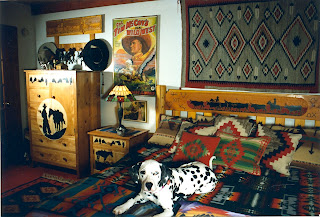 (above) Miss Annie Oakley's Best Target was her registered AKC name, but to me she was Annie.  She was the lucky gal who got to run with Billy (my border collie mix) and our horses when we boarded way-up in Browns Canyon--away from traffic.

Annie was a real scrapper and would take on all comers with her "dive-bomb" approach to fighting.  The other ranch dogs soon learned to leave her alone.  She was an incredible athlete and would regularly run down almost vertical cliffs in the canyons we rode.  I miss her more than any of the seven Dalmatians that have been in my life. 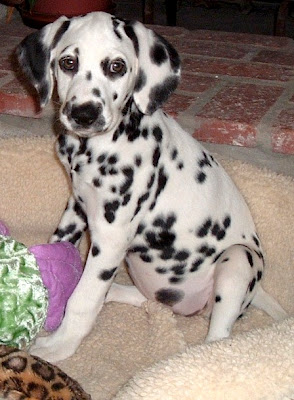 When Annie passed away in 2006, my wife surprised me with a new puppy.  Katie (above) is the most loving dog I have ever owned.  She sleeps with her head in my lap while I watch TV, and she sleeps pressed tight against me at night. 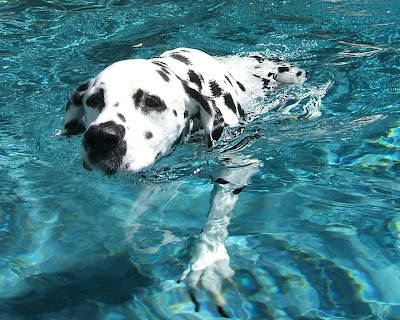 Katie is also an extraordinary swimmer, and has her very own swimming buddy--Teddy Blue. 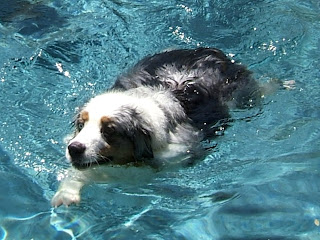 Teddy Blue (above) obviously isn't a Dalmatian, but his energy level is about the same, so we call Katie and Teddy "The Twins."  They are a constant joy, and if there is a siren in the distance they sing one heck of a duet.  What a howl! 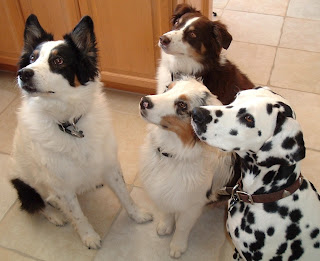 We lost Katie to bone cancer in December 2013, and Teddy Blue to lung cancer in October 2018. 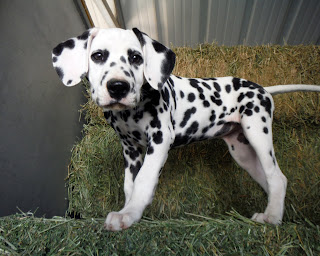 Maggie aka Magpie came to be part of our lives in January 2014. 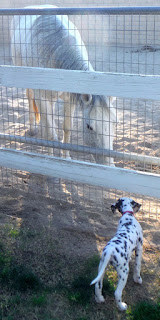 Maggie and Kasidy May, AQHA mare, became friends in 2014, and still have a mutual respect for one another. 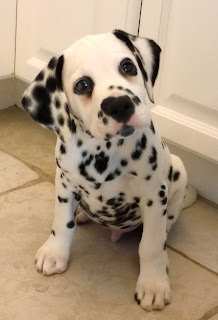 Posted by Drifting Cowboy at 12:59 PM