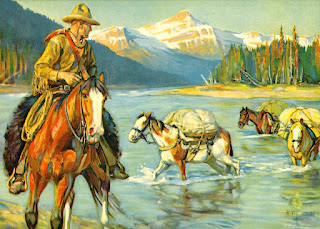 Philip R. Goodwin (1881–1935) -- Okay, I'll admit he wasn't really a cowboy, but he was a close friend of cowboy artist Charlie Russell, and did spend a lot of time visiting him in Montana.  And, few artists painted better pictures of cowboys in action. 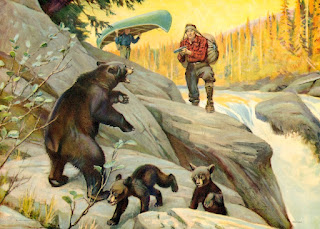 I first discovered -- and fell in love with -- his art when I was just a boy because he painted scenes of my two passions -- cowboys with a pack strings and hunters or fishermen canoeing.  Almost every sporting goods store or hardware store had at least one Goodwin advertising calendar or poster on display in the 1940s and 1950s. 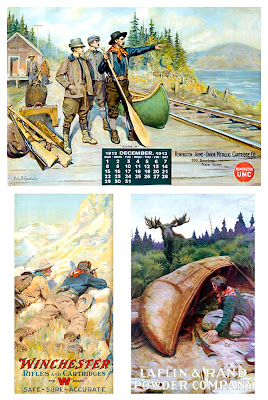 Goodwin became one of the best known illustrators of early twentieth century, and was widely admired for his pictures depicting hunting, fishing, wildlife, and cowboy scenes.  Many of his paintings were used in advertising promotions by firearms manufacturers like Winchester, Remington, and Marlin. 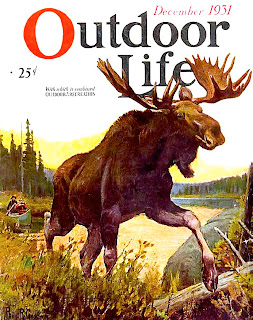 Goodwin's pictures were published in popular magazines like Harper's Monthly and Weekly, Outing, Scribner's, National Sportsman, Forest and Stream, Saturday Evening Post and Field and Stream.  He also illustrated African Game Trails for Theodore Roosevelt and Call of the Wild by Jack London.

He painted whimsical and exciting action scenes known as "predicament paintings" which became the most common theme in later works.  He was inspired by Charles Russell's depictions of human subjects surprised by animals demonstrating human characteristics and traits.

Note the similarity of Russell's "When Ignorance is Bliss" on the left (above) to Goodwin's "It's a Bear" predicament painting on the right.

Posted by Drifting Cowboy at 10:25 AM