Cowboy Wisdom -- Shooting from a Rest 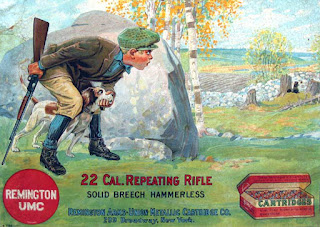 If killing varmints offends you -- please don't read this post!

In 1957, dad was looking for a way out of the home building business when he bought a parcel of land in Oakhurst, California -- just 13 miles south of Yosemite.  He purchased a few acres with highway frontage intending to build an RV resort.  The land was basically two ravines with a knoll between them.  Eventually the knoll became a low ridge that ran beyond his property and into national forest.

Dad's vision proved to be pretty good because after a local cat skinner completed his work dad ended up with a level parcel that had several hundred feet of highway frontage.  Dad also salvaged a nice grove of live oaks (behind the highway frontage parcel) on gentle slope that worked uphill to a pad for our new home.  The oak grove made a splendid corral for my horses.  The house pad itself was carved out of the knoll with a fill slope in the front yard.  The end result was a house that sat high enough to look over the lower parcel and highway, across a narrow valley carved by the Fresno River, with a delightful view Taylor Mountain beyond.

What dad had not counted on was the colony of ground squirrels that took-up residence in the slopes in front of and behind our home.  For those who are uninformed a colony of ground squirrels can construct a system of burrows that are 5 to 30 feet or more in length and can extend 2 to 4 feet below the soil surface.  Add to that a pair of squirrels can produce a litter of 7 to 8 each year, so it doesn't take long for them to destroy a fill slope that could send your house sliding to the bottom of the hill. 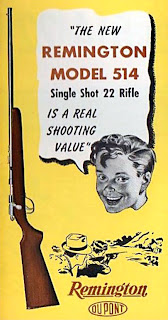 Fortunately for dad he had a secret weapon to fight the local rodent population… me and my trusty Remington model 514 single shot .22 rifle.  I couldn't shoot at squirrels on the front slope because I'd either be shooting toward the house or toward that highway, but the backyard slope was another matter.

I could hide on either side of the house and plink away at the back slope all day long.  All dad had to do was keep me supplied with .22 long rifle cartridges.  The one draw back was that you'd get one shot and the squirrels would dive into a burrow and disappear for a half hour.  I finally discovered that since my bedroom was in the back of the house and looked into the backyard all I had to do was remove the window screen, rest my rifle on the window sill, and fire.  Then I could go back to homework or what ever I was doing and wait till I spotted movement on the slope.

I got so lazy I could darn near leave the window open and plunk those rascals from bed.  Talk about shooting from a rest position :)

Dealing with ground squirrels in the front yard was a different matter -- but dad finally hit on a idea to get rid of the varmints living there.  He'd burn the rascals out.  One morning we started out pouring gasoline into their burrows, standing back, and tossing in a lighted match (gas was about 20¢ a gallon in those days).

We had started at the top of the slope and had about six small fires burning in squirrel holes when dad spotted a new hole further down the slope.  He told me to go down there and take care of it.  I climbed down the slope poured in some gas… and what happened next was a complete surprise to me.  Before I could strike a match that hole belched enough fire to singe off my eyebrows and my hair about an inch back from my forehead.

We never stopped to consider that the burrows might be connected.  Needless to say I always figured the ground squirrels got their revenge for my shooting forays.

Our ground squirrels wars continued until we eventually sold the place and moved.

Posted by Drifting Cowboy at 8:01 AM