Cowboy Culture -- Songs of the range 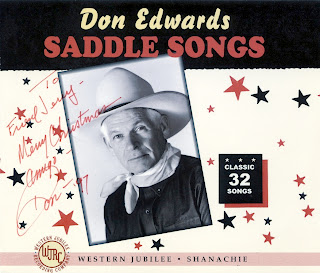 About the time the Gene Autry museum opened (in the late 1980s) I bought a cassette of cowboy songs sung by a fellow named Don Edwards.  I liked his music so much I played that cassette till I wore it out.  Those ol' cowboy songs were a joy and inspiration while I was makin' my cowboy furniture.
Whenever Don released a new album I was tickled to buy it, so I could enjoy his music while working in my shop, or traveling on the road to Cody, Tucson, and other cowboy gatherings.
At the Cowboy Traditions Show in Tucson (1995) I had an opportunity to meet Don while he performed in a concert.  A local rancher invited all of the show participants to his place for a party after the show.  During the party Don and I talked about book collecting, and I learned he was looking for a first edition copy of Pardner of the Wind by N. Howard 'Jack' Thorp (a scarce book published in 1945)--I found one for him a few months later.  That resulted in a Christmas gift of his latest CD (photo above) in 1997. 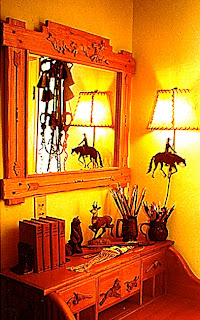 While we were still at the (1995) Tucson rancher's party I told Don his music had given me such pleasure I wanted to give him a gift: a relief-carved mirror I titled Back in the Saddle (photo above).  He must've thought I was nuts, but that started a friendship that's lasted many years. 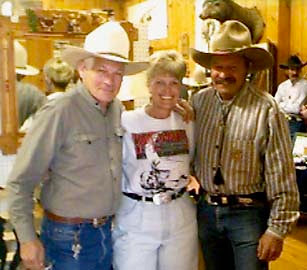 In 1997, Don and his wife Kathy (photo above) visited the Cody Old West Show where my pard Roger Miller and I had our art on display.  We learned Don had just won a role in Robert Redford's The Horse Whisperer (1998).  Roger and I were excited for him, and spent the whole year wondering when the film to be released.  Sadly Roger crossed over the Great Divide later in 1998, but I know he saw the movie, and really enjoyed seeing our mutual friend perform.
Later Don and Kathy purchased some of my cowboy chic furniture when we were both at the Santa Clarita Cowboy Festival.  I last saw Don while I was a cowboy mounted shooting event in Cave Creek, Arizona in 2008.
Afterword
We still say 'howdy' on Facebook now and then, and I listen to his wonderful classic cowboy music on my ipod while I'm cleaning stalls.
Checkout Don's Blues Medley on YouTube:
http://www.youtube.com/watch?v=5YQNWGA5O18&feature=related
Posted by Drifting Cowboy at 10:33 AM