Meanwhile back at the ranch -- Hook Rock (Indian Hills) 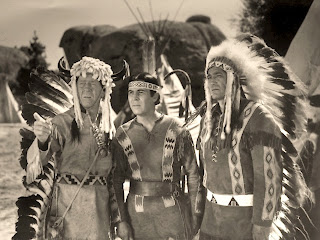 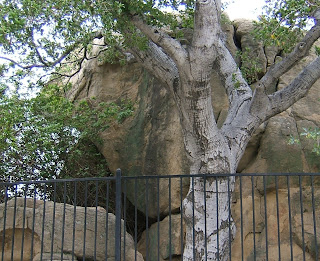 The east side of Hook Rock (photo above) can be seen from the upper deck of the pool area at the south end of the recreation complex.  It's a little hard to spot today because it's partially hidden behind a tree. 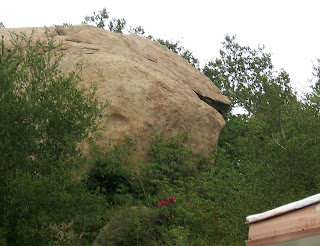 And, the west side is partially hidden behind a mobile home (below).  You need to find the correct line of sight or you'll miss it. 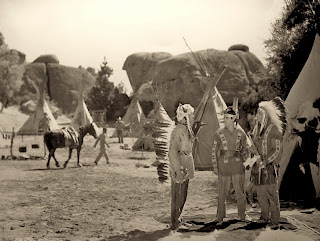 The best way to find Hook Rock is to locate Split Rock (above top-left) at the south end of the pool area, then look to the west (your right when facing Split Rock from the pool).  The movie still above is from The Phantom Rider (1946) [a movie serial]. 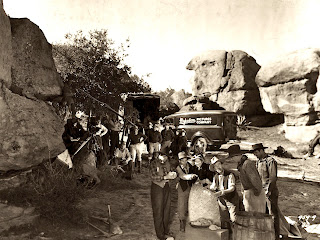 Here's another look at Hook Rock's east side from a slightly different angle as seen in the still (above) from Grandpa Goes to Town (1940). 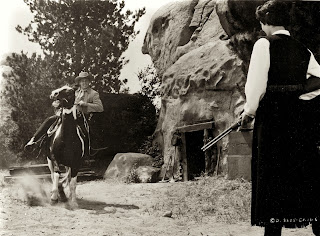 Here's a close-up look (above) at Hook Rock and its relationship to Cave Rocks in a movie still from Riding with Buffalo Bill (1954). 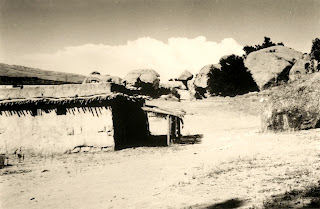 Here's a look at the west side of Hook Rock (look above the porch roof) as seen in Johnny Mack Brown's Pony Post (1940). 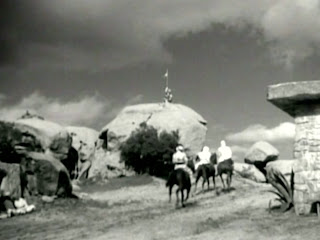 In the screenshot (above) from Wee Willie Winkie (1937) you can see the opening for a trail that passed between Hook Rock and Split Rock. 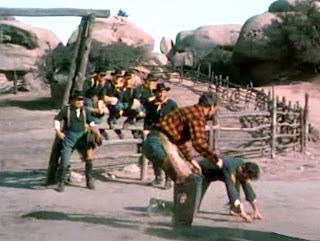 Here's a really informative screenshot from Ben Johnson's Wild Stallion (1952).  The rock at the top left-center of the photo (at the end of the corral fence) is the west side of Hook Rock (hook not visible).  To the right of Hook Rock (in what appears to be the middle of the trail) is a vertical rock that is actually the top of Lash's Archway (in today's world it's on the east side of the pool area). 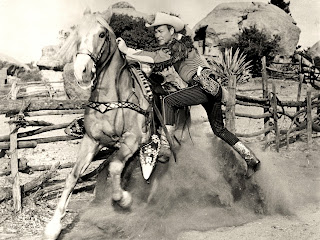 In the publicity still for the "Roy Rogers TV Show" (above) you can see the west side of Hook Rock at the end of the corral photographed from a slightly different angle.  The hook is just becoming visible in this photo. 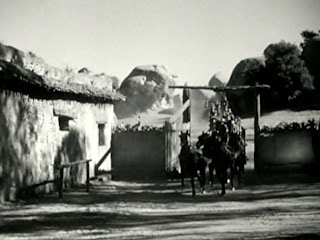 Hook Rock as seen in John Wayne's Stagecoach (1939) as the stage approaches the Dryfork Station--not to be confused with the famous scene of the stage with "Garden of the Gods" in the background which is at the Apache Wells Station. See http://a-drifting-cowboy.blogspot.com/2011/11/meanwhile-back-at-ranch-garden-of-gods.html 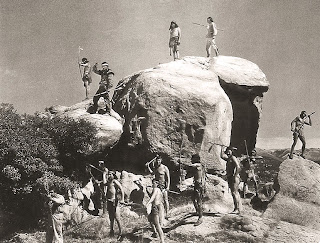