Meanwhile back at the ranch -- Split Rock (Indian Hills) 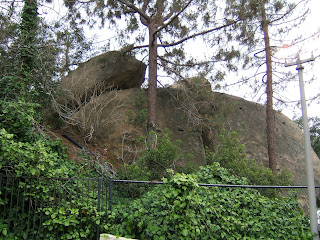 Meanwhile back at the ranch is a continuing series about "rock stars" (landscape features) on the old Iverson Movie Location Ranch in Chatsworth, California.  For more information at the Iverson Ranch see: http://a-drifting-cowboy.blogspot.com/2011/10/iverson-movie-location-ranch-chatsworth.html

Split Rock (photo above) is part of the Cave Rock formations in the Indian Hills Mobile Home Village recreation area (the mobile home village is a private community).  The Indian Hills Mobile Home Village is located immediately south of the Ronald Reagan Freeway and west of Topanga Canyon Boulevard.  The formation was not a significant filming feature, but frequently appeared in the background of chase scenes lensed in Indian Hills. 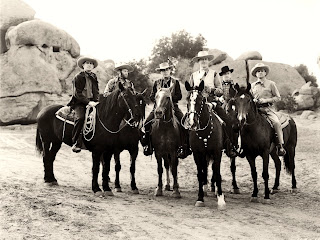 The photo above from The Lone Rider Rides On (1941) (starring George Houston) is the only movie still in which I've seen Split Rock without Hook Rock (its companion to the west). 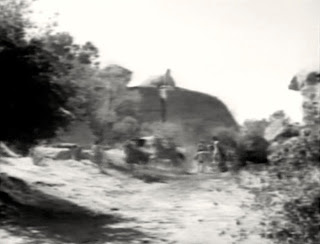 In the screenshot (above) from Zorro's Fighting Legion (1939) you can see Hook Rock in the top right corner of the shot.  Split Rock is to the left.  Because there is a trail between Hook and Split Rocks they are often seen together in chase scenes. 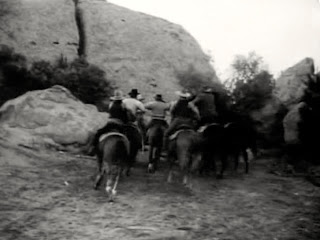 In this screenshot (above) from White Eagle (1941) we see riders turning on onto the trail beyond (south) Hook Rock which is to their right (behind them and out of the frame). 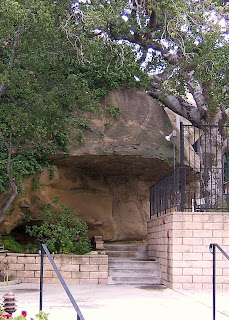 To the east of Split Rock (and a little to the north) there is a formation I call Overhang Cave Rock.  It is located on the southeast side of the Indian Hills Mobile Home Village pool area.  In the photo above you can see the steps that lead to a deck south of the pool.  Split Rock forms a wall at the south side of that deck. 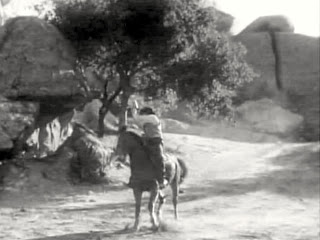 In the screenshot above from "The Lone Ranger TV Show" you can see the relationship between Overhang Cave Rock to the far left and Split Rock to the top right. 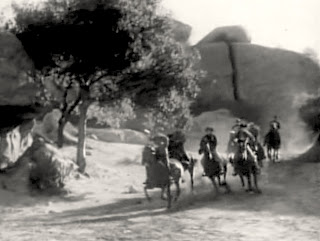 Here's another slightly wider screenshot (above) from "The Lone Ranger TV Show." In it you can see a pose that has just come through the pass between Split Rock and Hook Rock (again just out of the frame to the right).

Split Rock can be seen in the following films:


Posted by Drifting Cowboy at 7:21 AM