Meanwhile back at the ranch -- Cave Rocks (Indian Hills)

Meanwhile back at the ranch is a continuing series about "rock stars" (landscape features) on the old Iverson Movie Location Ranch in Chatsworth, California.  For more information see: http://a-drifting-cowboy.blogspot.com/2011/10/iverson-movie-location-ranch-chatsworth.html
About 1965, construction began the Ronald Reagan Freeway (118), and the Iversons sold 17.5 acres for the development of a mobile home village (photo below).  Today the Indian Hills Mobile Home Village sits immediately south of the freeway on the west side of Topanga Canyon Boulevard. 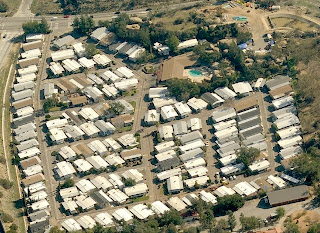 The area known as Indian Hills had been one of the busiest filming locations on the lower ranch and included such well-known rock formations as Split Rock, Hook Rock, Cave rocks, and Lash's Archway (photo below - clockwise from top left).  It also had been the location of the Iverson Ranch Western Street. 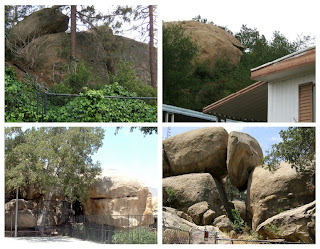 I'm going to describe the aforementioned formations located around the Indian Hills Mobile Home Village pool area in a series of posts beginning with Cave Rocks in this post. 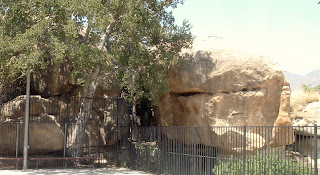 Cave Rocks (above as they appear today) are actually two boulders with a separation between them.  Film companies built a false front between them enabling the formation to appear as a cave, tomb, or even a Western mine. 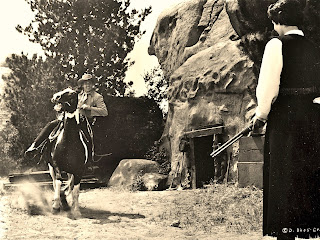 Cave Rocks with a false front creating a mine (above) in Riding with Buffalo Bill (1954).  Look at the top left of the rock formation and you'll see a hook shaped rock which we'll discuss in another post. 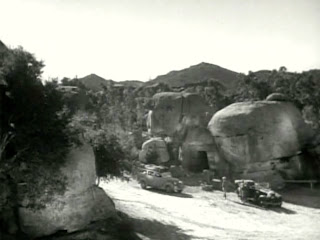 The screenshot above is from Adventures of Captain Marvel (1941), and gives you a wider view of Cave Rocks and surrounding formations. 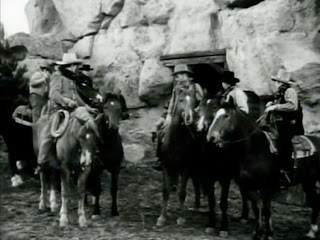 In the screenshot above from White Eagle (1941) the bad guys use Cave Rocks as a hideout mine. 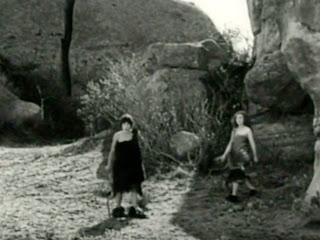