Cowboy Wisdom -- Don't interfere with somethin' that ain't bothering you none 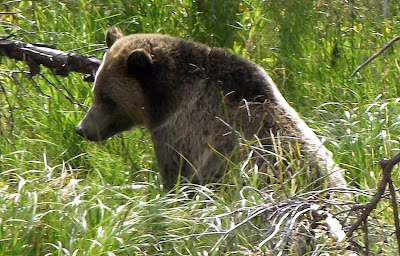 I gotta admit the thrill of seeing grizzly bear roaming in it's natural habitat is pretty darned exciting.  My hunter instinct sure gets on high alert, and sometimes I forget I'm carryin' a camera instead of a .30-06.
When you know three people have been killed (in or near Yellowstone National Park) during the past few months you outta be a little smart about how close you get to ol' ephraim.
It's amazing to me how some folks just don't savvy the good advice offered by the park service folks.  Rangers recommend that if you are on foot you should not approach within 300 yards of grizzly bears.  They suggest if you are adjacent to your vehicle that you stay within 2 yards of entering it, but only if a grizzly is no closer than 25 yards to you.
When I took the photo above I was about a hundred yards from this grizzly.  When I first approached I didn't know just where the bear was.  It was only after I got next to these photographers that I could see the bear. 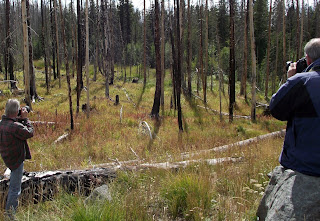 I snapped a few quick picks--all the time thinking… a grizzly can run 35 miles per hour, maybe he'll get to these guys first, and how fast can an old guy with an artificial hip run?
I've seen lots of bears in Canada and the United States while traveling in a canoe, on horseback, or driving a car, but this is the closest I've been to a grizzly on foot.
So in the future I think I'll heed some good ol' cowboy wisdom… Don't interfere with somethin' that ain't bothering you none, and just stay in the truck (< :
Posted by Drifting Cowboy at 7:19 AM