Meanwhile back at the ranch -- Batman Rock 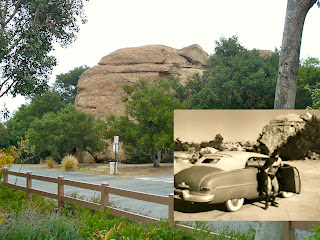 Batman Rock (above and left of the inset) is located just west of Redmesa Road on the northern boundary of the Garden of the Gods park (actually it's the border of the Cal-West Townhomes).  Just look for the private drive named Horizon Place--you'll see a parking lot--and you'll find Batman Rock to the south.

The formation wasn't a significant landscape feature, but it does show up in the background from time to time. 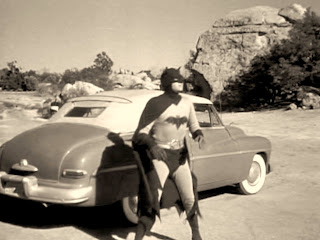 Batman and Robin (1949) starring Robert Lowery, Johnny Duncana nd Jane Adams (Iverson Ranch) Columbia.  Batman Rock can be recognized by two features:  1) the lower left side breaks away leaving a shadow below, and 2) the top top right side has an angular cap rock. 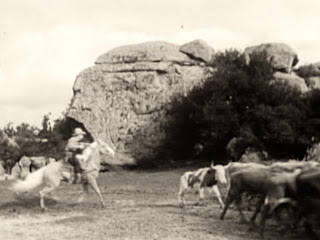 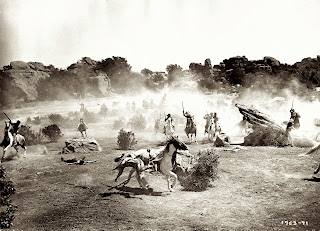 The Plunderers (1948) starring Rod Cameron (Corriganville)(Iverson Ranch) Republic.  In the photo above Batman Rock is about 1/4 left of top center) 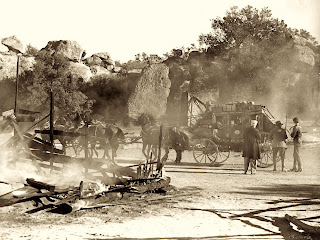 Stagecoach (1939) starring John Wayne (Iverson Ranch) United Artists.  In the photo above of the burnt-out stage station in John Ford's Stagecoach Batman Rock is at the far top left.  All you can see is its cap. 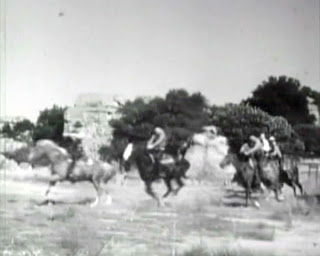 The Avenging Rider (1943) starring Tim Holt (Iverson Ranch) RKO.  Okay, now stay with me if you can.  In the screenshot above Batman Rock is just out of the frame to the left.  The action is being filmed at a stagecoach relay station just north of the Garden of the Gods.  See the vertical set of rocks at the top center of the photo?  Today those rocks are hidden behind a condominium, but if you'll go back to the burnt-out stage station photo from John Ford's Stagecoach (two above) you'll find the same rocks in the top center. 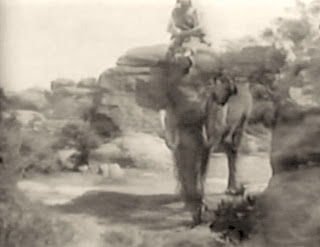 Three Ages (1923) - Buster Keaton, Margaret Leahy and Wallace Beery (Iverson Ranch) Buster Keaton Prod.  In the screenshot above (behind Wallace Beery's mastodon and on the left) you can just make out the shadow of the recessed area of the formation. 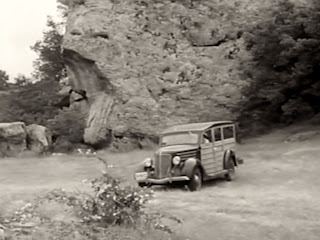 In the screenshot above from Haunted Harbor (1944) (starring Kane Richmond, Kay Aldridge and Roy Barcroft (Iverson Ranch) Republic) we get a close-up look at the recessed slope on the east side of Batman Rock

Posted by Drifting Cowboy at 5:10 PM