Meanwhile back at the ranch -- Indian Hills Chase Roads 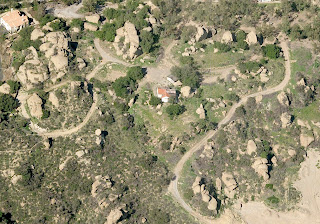 The photo above is an aerial view of the Indian Hills Chase Roads as they appeared in 2007.  The house in the center of the photo once belonged to Carl and Augusta Iverson, and was known as the "old folks home."  It burned down in a 2008 brushfire that swept through Chatsworth. 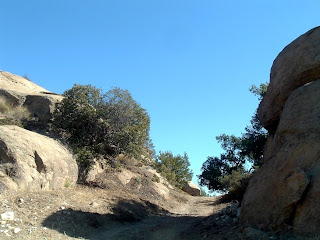 Vultura's Pass (in the 2009 photo above) is situated on the far left side of the photo at the top of this post (on outside edge of the circular trail).

The pass takes its name from the Republic serial The Perils of Nyoka (1942) because it was the location of the evil Queen Vultura's palace.  Vultura was Nyoka's arch nemesis. 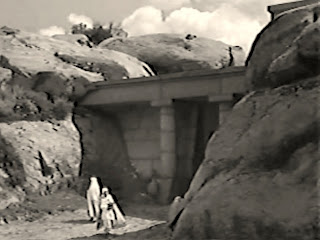 The screenshot above is Queen Vultura's palace taken from a scene in The Perils of Nyoka (1942). 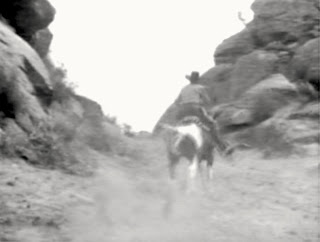 The screenshot above gives us a look at the pass in a scene from Bill Elliott's The Taming of the West (1939).  See if you can find the arrowhead shaped shadow on the left side of the pass in all three photos above. 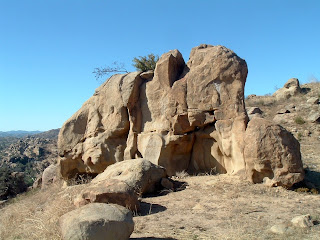 The 2009 photo above is Vultura's Trail Rock.  The formation is located on the trail to the south of Vultura's Pass, and stands alone (sort of at the bottom of the circular trail). 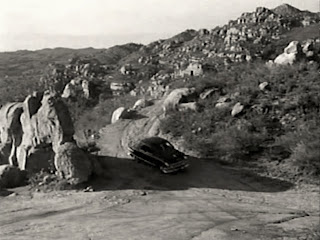 The screenshot above from Blackhawk: Fearless Champion of Freedom (1952) gives us a good look at Vultura's Trail Rock.  This camera angle offered a dramatic vista beyond the formation. 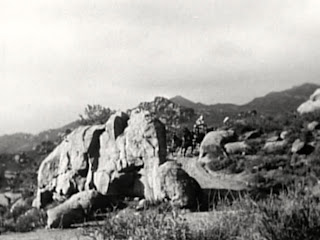 Here's another screenshot with Vultura's Trail Rock (above) in a scene from Roy Rogers' In Old Cheyenne (1941). 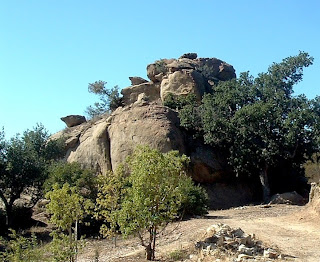 If you continue on the same trail, traveling counter clockwise from Vultura's Trail Rock, you'll come to another pass at about one o'clock on the circular trail.  This pass has been dubbed Outlaw Pass. 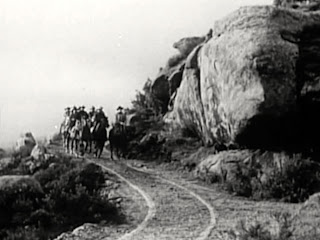 The screenshot above form In Old Cheyenne (1941) gives us a good look at the pass.  Do you see the pointed rock in the two photos above? 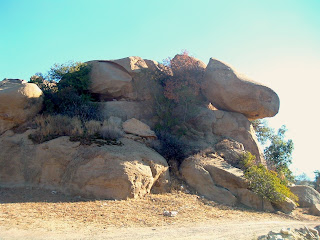 From Outlaw Pass if you turn northeast on the trail you'll come to a 'tee' fork in the trail--straight ahead is the formation called Hangover Rock.  If the old folks home was still standing you'd see it from there.  Carl died in 1947 and Augusta followed a year later.  I wonder if they sat in their yard and watched the filming action at Hangover Rock? 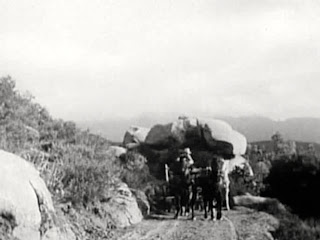 Above is a screenshot of Hangover Rock in a scene from Roy Rogers' In Old Cheyenne (1941).  You gotta wonder if the cameraman saved a setup and just pivoted the camera after he filmed scenes for Outlaw Pass (see above). 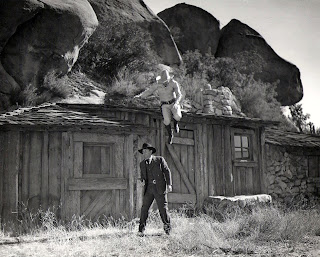 Here's a swell photo (thanks to Bruce Hinkey) with Hangover Rock as it appeared in Buffalo Bill Rides Again (1947). 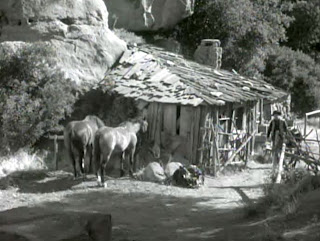 Posted by Drifting Cowboy at 1:55 PM