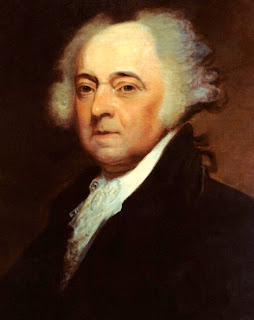 John Adams (portrait above) was the great grandson of Thomas Boylston who was born 1615 in French, Kent, England.  At age 20, Thomas sailed from London on the ship "Defence" and arrived at Boston, Massachusetts on 8 October 1635.  He settled in nearby Watertown, in the colony of Massachusetts, and died there in 1653.  Thomas Boylston was my 10th great grandfather.

1758, he was admitted to the Massachusetts Bar

1774, he was one of the five delegates chosen by Massachusetts to the Congress at Philadelphia

1776, Adams persuaded congress to approve his resolution calling on the colonies to adopt new independent governments.

On June 7, 1776, Adams seconded the resolution of independence introduced by Richard Henry Lee which stated, "These colonies are, and of right ought to be, free and independent states," and championed the resolution until it was adopted by Congress on July 2, 1776.

He was appointed to a committee with Thomas Jefferson, Benjamin Franklin, Robert R. Livingston and Roger Sherman, to draft the Declaration of Independence, which was to be ready when congress voted on independence.

The first draft of the Declaration of Independence was written primarily by Jefferson, and Adams (who had promised to consult with Jefferson) continued to occupy the foremost place in the debate on its adoption.

After editing the document further, congress approved it on July 4. Many years later, Jefferson hailed Adams as "the pillar of [the Declaration's] support on the floor of Congress, its ablest advocate and defender against the multifarious assaults it encountered."

During the Revolutionary War, he successfully negotiated treaties of recognition and friendship with France, Holland and Prussia, giving the United States its first foreign recognition as a nation.

1779, he wrote most of the Massachusetts Constitution, with assistance from Sam Adams (his cousin) and James Bowdoin.

In 1785, he was appointed as the Ambassador from the United States to Great Britain (the first following the Revolution).

1797 to 1801, President Adams built up the US Navy, fought an undeclared war with France, and signed into law the Alien and Sedition Acts (a legal instrument against French actions in America, but it was used by some politicians to silence their political opponents).

1797, he gave the first ever State of the Union address.

1800, Just before leaving office he became the first President to occupy the newly constructed White House.

1800, Adams appointed his Secretary of State, John Marshall, as Chief Justice of the Supreme Court; Marshall is considered one of the best Chief Justices the US ever had.

July 4, 1826 (on the 50th Anniversary of the Declaration of Independence) he died at his home in Quincy.

My favorite John Adams quote, "In my many years I have come to the conclusion that one useless man is a shame, two is a law firm and three or more is a congress.”

John Adams and I share the same birth month and day (October 30) :-)
Posted by Drifting Cowboy at 8:04 AM