On October 6, 1683, the British ship "Concord," arrived at Chester, on the Delaware River in Pennsylvania.  On board were Dirk Herman, Abraham Op den Graeff (cousin of William Penn), Tuenes Kunders, Lenert Arens, Reinert Tisen or Reynier Tyson (my 8th great grandfather), Wilhelm Strepers, Jan Lensen, Peter Keurlis, Jan Siemens, Johann Bleikers, Abraham Tuenes, and Jan Lueken altogether some thirty-two German Palatines, comprising the thirteen families who founded the Quaker community of Germantown (part of Philadelphia).
The Religious Society of Friends' (Quakers) peace testimony is largely derived from beliefs arising from the teachings of the Bible to love one's enemies.  Quakers believe that nonviolent confrontation of evil and peaceful reconciliation are always superior to violent measures.
I don't know much about Reynier Tyson--my 8th great grandfather--other than that he was born 1659 in Krefeld, Nordrhein-Westfalen, Germany; emigrated to the United States on the Concord in 1683; converted to the Quaker religion; and died 27 Sep 1745 in Abington, Lackawanna, Pennsylvania.  I am descended from him through my mother's paternal grandmother Lillian Pierce (1867-1957) who married David Jackson Bailey (1865-1949) in 1884.
For me the most interesting thing about Reynier Tyson is that he was also the 4th great grandfather to President Theodore Roosevelt.  That makes President Theodore Roosevelt--my 5th cousin 4x removed. 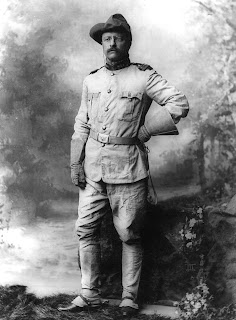 Theodore Roosevelt, Jr. (October 27 1858  - January 6 1919), was the twenty-sixth President of the United States, and a leader of the Republican Party and of the Progressive Movement. He became President of the United States at the age of 42. He served in many roles including Governor of New York, historian, naturalist, explorer, author, and soldier. He is most famous for his personality: his energy, his vast range of interests and achievements, his model of masculinity, and his "cowboy" persona.