More than four decades (2012) after Roy Rogers and Dale Evans moved away from the San Fernando Valley, memories of their Double R Bar Ranch still live on in Chatsworth. 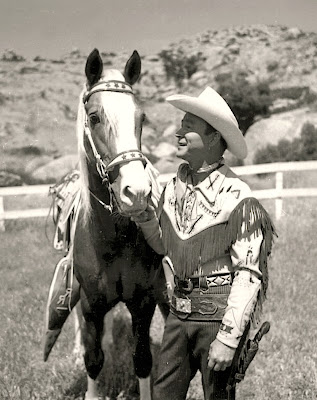 In a 1987 quote Dusty Rogers said, "We moved from the Hollywood Hills to Encino in the San Fernando Valley, then to a ranch in Chatsworth. We always moved away from the encroaching population because Dad liked his privacy. He wanted his kids raised on a ranch, where they could have horses and pigs and chickens and cows."

In 1955, Roy Rogers and Dale Evans purchased a 138-acre rancho in Chatsworth for $120,000. Over time, additional land was added, and eventually the ranch was estimated to be 300+ acres, some of which may have been leased. The original rancho had a small house that had been built in 1938. Roy and Dale expanded the house to approximately 6000 square feet. 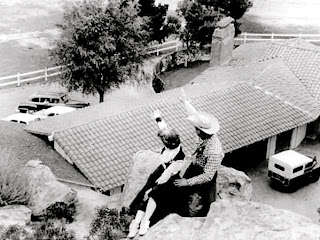 The Roy Rogers Show ran on NBC TV from 1951 to 1957. The show featured the Double R Bar Ranch, located near the fictional town of Mineral City. In reality it was the Chatsworth home ranch of Roy Rogers, "The King of the Cowboys" and Dale Evans, "The Queen of the West."

The Double R Bar Ranch was surrounded by Chatsworth's rocky hills, and having its stables at home made it the perfect location for the show. As Roy said, “You could rollout of bed and start filming.”

Most of the earlier shows had been filmed on the Iverson Ranch and the Goldwyn Studios lot, but statements from Roy in the video documentary "Roy Rogers, King of the Cowboys" (1992) confirm that the Double R Ranch in Chatsworth was featured in many later TV episodes.

In 1965, after Roy and Dale lost a child in a bus accident on a church outing--their third child to die--the couple sold the remaining property and moved to the high desert near Apple Valley, California. Perhaps Chatsworth held too many sad memories for them.

In 1992, Eugene Kilmer's wife Senga was living in the house that had originally belonged to Roy and Dale (Los Angeles Business Journal, Jan 6, 1992). 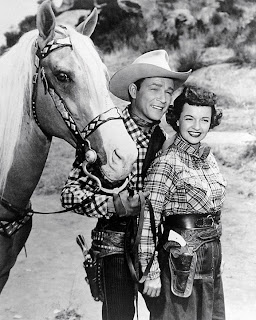 In 1997, Roy and Dale last appeared in Chatsworth for the dedication of the Chatsworth Rail Station, where they sang "Happy Trails to You."

The new owner kept Roy and Dale's sprawling pink ranch house at the top of Trigger Street pretty much original (Los Angeles Times, July 7, 1998): A rock with a waterfall seen in several of Roy's films is in the backyard.  His and hers closets built in the master bedroom for the Rogers' large wardrobe of western outfits remains.  The recreation room fireplace has spurs, horseshoes, bridle bits and other equestrian artifacts embedded into the stone work.  A terrazzo tile floor still has the fading initials of Roy, Dale and six of their children.

Posted by Drifting Cowboy at 7:46 AM