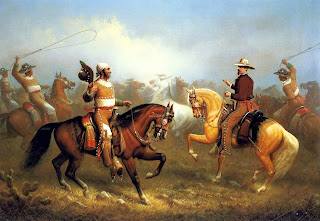 First Horses in the Valley…

Horses evolved here about 50 million years ago, but disappeared during the last ice age 11,000 years ago.

Then after 1769, Spanish explorers and Mission padres returned horses to the San Fernando Valley.

The people living in the Valley -- before 1848 -- were known as Californios.  They were Vaqueros -- a word future cowboys anglicized to Buckaroo.

Early California had just one industry -- the hide and tallow trade.  Cowhides were used for leather products, and tallow was used to make soap and candles.

The primary market for trade was New England -- that's right!  Hides were shipped by sea -- around Cape Horn -- to ports in Boston and New York; roughly 15,000 miles away. 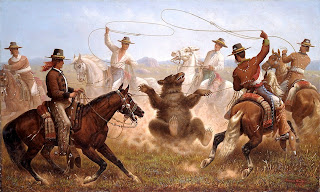 Their horse training methods included the use of fine tooled saddles, braided rawhide hackamores, and fancy silver mounted bits and spurs -- all of which are still admired by horsemen today.

Future California saddlemakers -- such as Edward Bohlin -- saddlemaker to the stars -- would later be inspired by the artistic trappings of silver and leather first introduced by the Californios.

Vaquero traditions of horsemanship, equipment, and language greatly influenced all cowboys that followed. 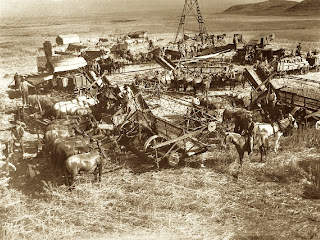 Throughout the rest of 1800s horses continued to be used primarily for agriculture and transportation.

Movie industry in the Valley…

Fast forward to… 1910, the movie industry came to Southern California.

Affordable land brought the studios to the valley… 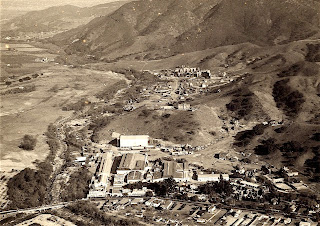 Universal Studios were the first to arrive in 1914.  First National Studios came to Burbank in 1926 (in 1928 it became Warner Bros).  Mack Sennett built his studio on the corner of Ventura Blvd and Laurel Canyon in 1927 (in a few years it became the home of Mascot, and by 1935 it was the home of Republic Pictures).

Many early movie stars who worked for a single Valley studio -- like Republic Pictures -- moved here.  By the 1930s the motion picture business is the third largest industry the valley behind agriculture and subdividing.

As stars gained fame and fortune many became interested in horse racing and polo.  During the 1930s and 1940s lots of stars bought horse ranches in Chatsworth and Northridge -- which called itself The Horse Capital of the West. 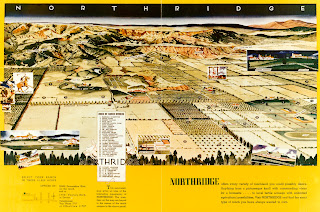 Marwyck Farms owned by Barbara Stanwyck and her agent Zeppo Marx is a good example.  They had 140 acres of barns and pasture along north Reseda Blvd and were engaged in thoroughbred horse breeding.

In 1940s and 1950s -- The Valley was full of Hollywood cowboys and beautiful horse ranches.

1949 was a landmark year in my life -- my dad brought home our first television set.  It had a whopping 12 inch picture tube.  That's what we called a TV screen back then.

In 1950 -- we went on a family vacation to visit mom's relatives in Idaho and Montana. 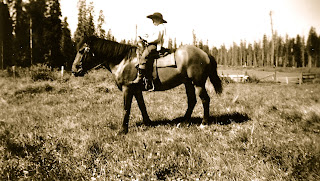 In Montana -- I learned to ride a horse -- not one of the little Shetland Ponies like those at our local 'Pony Ride' on Sepulveda Blvd in Sherman Oaks, but a real live Montana cow pony…   Wow!  I was hooked!

Another major event in my life was visiting the 1952 Rose Parade in Pasadena.  That's the first time I saw Hopalong Cassidy and Roy Rogers -- in person -- on their horses. 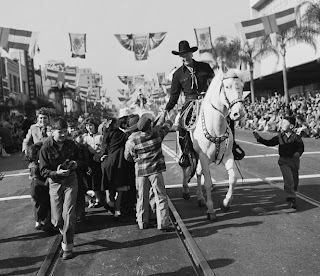 For a ten year-old kid that was a huge thrill. I was amazed by the fancy silver saddles on Trigger, Topper, and Sheriff's posses with their gorgeous Palominos. 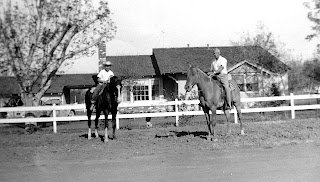 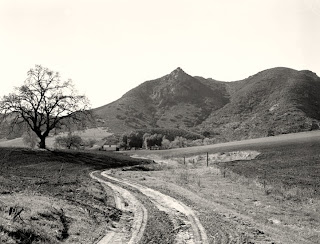 Back then, Woodland Hills still had lots of wide-open spaces… dirt roads, cattle ranches, and herds of sheep... grazing on the oat-covered hills.

Kids in my neighborhood rode their horses to an adobe barn -- on Rancho El Escorpion -- to play cowboy.  We also crossed under Ventura Boulevard to ride in the Santa Monica Mountains above Calabasas.  We could ride all the way to Chatsworth on dirt roads.

Living in the Valley during the 1950s was an amazing experience.  It seemed like there were movie cowboys and beautiful horses at every bend in the road. 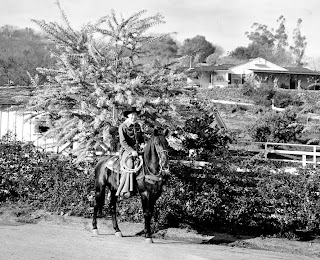 I still remember a Sunday in October 1954, when my horse 'Sandy' and I participated in the 1st annual West Valley Junior Equestrians Horse Show on Wild Bill Elliott's ranch in Calabasas.

We never gave a second thought to spotting movie stars, such as John Wayne and Roy Rogers, driving their sports cars along Ventura Boulevard, or seeing cowboy actor Ray “Crash” Corrigan making a guest appearance at the grand opening of a new shopping center…  It just seemed natural.

In those days a Sunday drive along Devonshire Street through Chatsworth and Northridge was especially delightful.

The two-lane road gently undulated through hills, and was bordered by white four-rail fences. 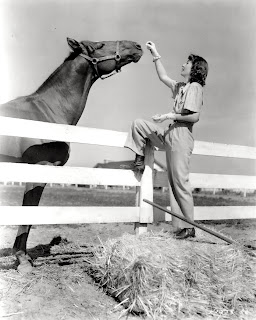 Over each fence -- was a view of majestic horses in lush green pastures.

Horse related activities and businesses flourished in the Valley….  There were polo clubs, hunt clubs, all kinds of horse shows, and lots of local equestrian parades.

We had feed and tack stores, Kings Western Wear, Nudies the rodeo tailor, movie-horse rental stables, fine horse trainers... like Glenn Randall (who trained Trigger for Roy Rogers)… and Ed Bohlin's saddle shop was just over the hill in Hollywood. 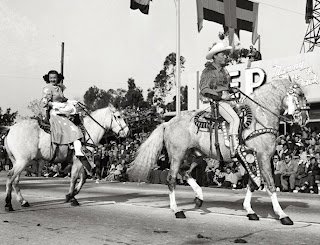 On New Year’s Day we went to the Rose Parade to see our favorite cowboy heroes and their horses.  We knew all the horses by name. 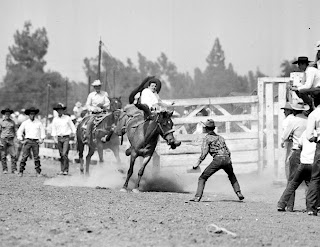 If we wanted to see a rodeo… we went to Devonshire Downs, or Corriganville or we went downtown to the Coliseum to watch the annual Los Angeles Sheriff's Rodeo. 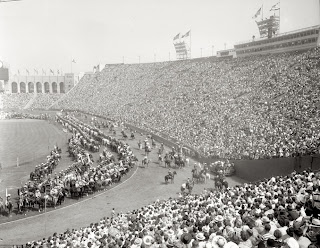 The Sheriff's Rodeo attracted over a 100,000 fans and featured movie stars like Roy Rogers or Rex Allen as the grand marshal…

Compare that the recent Olympic Games in London that boasted having 82,000 soccer fans at Wembly Stadium for the women's final match.

In 1964 -- after serving in the Army -- I returned to the Valley.  I found it had been criss-crossed by freeways, and there were tens of thousands of new homes... where once I had ridden horses on dirt roads and in open fields.

By the 1980s -- filming industry too had abandoned the Valley, and the movie location ranches were long-gone.

My passion for horses comes -- not only -- from my family's Old West legacy, but also from my love of Western movies.

After moving to Chatsworth -- during the past dozen years I -- collected movie memorabilia and researched the filming locations that once existed in the Santa Susana Mountains above Chatsworth.

Since then I've written two books...

Reel Cowboys of the Santa Susanas (2008) focuses on Western movies.

And, Rendezvous at Boulder Pass: Hollywood’s Fantasyland (2010) added other genres… including Silent Films, the Classics, the Cliffhangers and even more Westerns.

Both books examine the rocky features -- 'Rock Stars' I call them -- that attracted Hollywood film-makers to Chatsworth, and -- both books -- include histories of movie location ranches including…

My primary focus is Chatsworth's Iverson Movie Ranch…  which has been celebrated as the most shot-up movie location ranch in motion picture history.

It was located in the picturesque rocky foothills of the Santa Susana Mountains...

And, has been used to simulate terrain in Africa, Asia, the South Seas, the Wild West and Alien Planetscapes.

As many as 2,000 motion pictures and television shows are reported to have used the Iverson Movie Ranch to shoot some or all of their outdoor scenes.

Its picturesque sandstone boulders, oak trees, and the Rocky Peak and Oat Mountain backdrops, make it one of the most recognizable sites to movie goers of all generations.

In its heyday, the ranch had 25 miles of scenic chase roads, an adobe village, a complete ranch set, and a Western street.

The earliest films shot in Chatsworth were…

Cecil B DeMille's The Squaw Man (1914) -- a Western -- was the first feature length movie filmed in Chatsworth.

They were followed in the 1930s by six-gun heroes like:

The Cowboy Stars that came in the 1940s were:

The last wave of cowboys in the 1950s included:

The best known Western titles were:

The most famous Classic Films were:

The most successful Cliffhangers were:

The Miracle Rider (1935) with Tom Mix (his last film).  Followed by a herd of masked men in various Lone Ranger and Zorro titles.  There were also comic book heroes like Captain Marvel, Superman, Dick Tracy and Batman and Robin.

My favorite was The Perils of Nyoka (1942) -- Loosely based on the work of Edgar Rice Burroughs.

The most famous actor had to be President Ronald Reagan who starred in:

There were too many television titles to mention, but dozens of shows... filmed hundreds of episodes on Chatsworth locations.

So you can see why I believe… In our San Fernando Valley...   Horses and Movies are Forever Linked.

The story above is part of a presentation for the Museum of the San Fernando Valley given on August 30, 2012 at the Sherman Oaks Fashion Square.

My talk was accompanied by a short video -- part of which -- can be seen here...
http://www.youtube.com/watch?v=kw8yuyX29HQ&feature=youtube_gdata_player

Posted by Drifting Cowboy at 5:21 PM