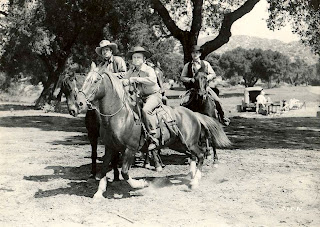 Okay, I have to fess up before we get started on this post -- I'm on shaky ground when it comes to describing all the insert roads and chase roads on the old Corrigan Movie Location Ranch (Corriganville).

For one thing Corriganville (at roughly 1600 acres) was three times the size of the Iverson Ranch.  Secondly -- to my knowledge -- Corriganville didn't have as many 'named features,' so it's a bit hard to explain just where a photo was taken.  Finally, I have admit that my research has been focused on the Iverson Ranch and Corriganville is a secondary project.  Never-the-less I've collected some good Corriganville stills that I'll share with you. 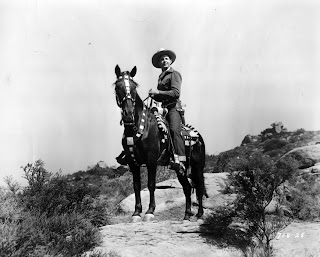 I recommend you start out by reviewing my Corriganville Overview post at http://a-drifting-cowboy.blogspot.com/search?q=corriganville+overview 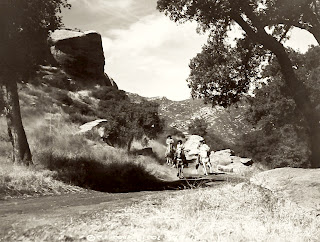 If you examine the aerial photo it is pretty easy to pick out the wider insert roads.  The most filmed of these was probably the well beaten path -- between Silvertown and Robin Hood Lake -- seen above in a still from Bullets for Bandits (1942). 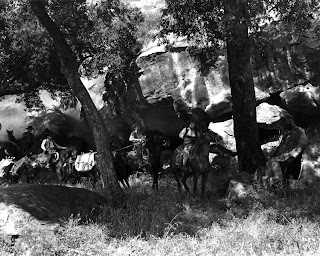 Another heavily used series of chase roads ran from Silvertown north toward Fort Apache and beyond.  This series of parallel trails had a branch -- seen above in a still from Arizona Cyclone (1941) -- that skirted along a rocky bluff under the shadows of oak trees. 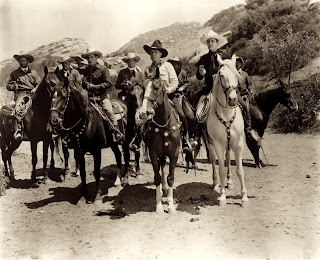 This still from Death Valley Rangers (1943) gives you a look at some of the often seen background rocks with their angular strata. 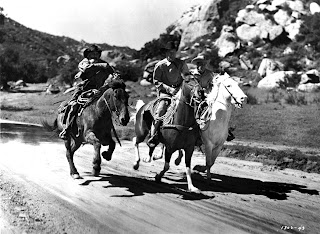 The still above from The Man From Thunder River (1943) gives you a look at the main insert road just east of Silvertown. 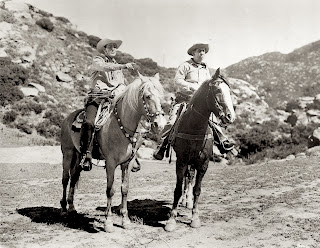 The photo above from a scene in Boss of Boomtown (1944) gives you a look at the rocky terrain on ridge and canyon trails that ran both west and north of Fort Apache. 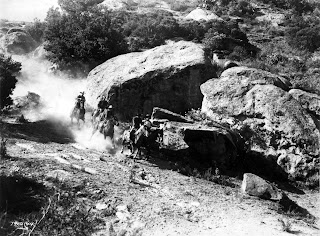 To add to the confusion -- at least for me -- there were several narrow trails running along side of dramatic rock formations as you can see above in a still from Renegades Rio Grande (1945).  These trails seemed to come out of nowhere and eventually tied into a main insert road. 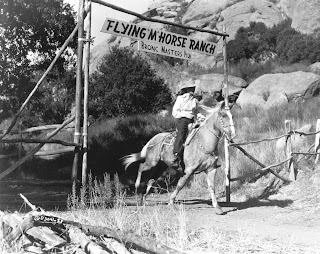 The movie still above showing Evelyn Keyes riding a palomino is from a scene in Renegades (1946), and was probably snapped just east of Silvertown. 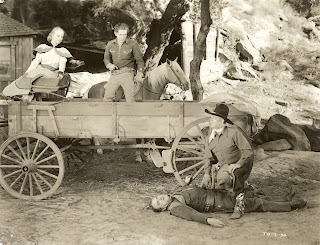 Many of the chase roads and trails have outlaw shacks along side them.  This one seen in Outlaw Trail (1944) was just north of Silvertown against the rocky bluff I described earlier. 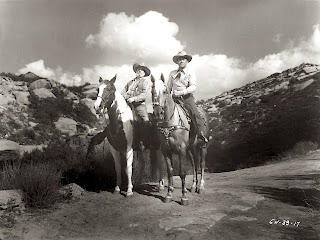 The still above from Trailing Danger (1947) gives you a look at one of the rocky ridges near Fort Apache. 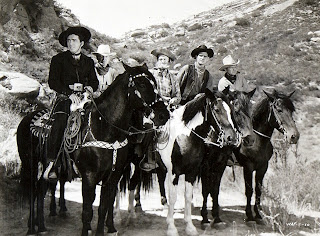 Here's another view of the same rocky background (seen in the previous still) in a scene from Frontier Revenge (1948). 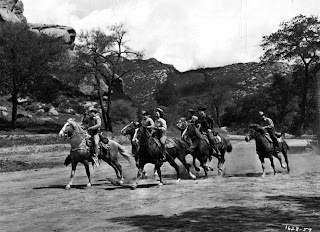 This final publicity still for Down Dakota Way (1949) was probably taken just east of Silvertown, but I'm 100% sure.

My other Corriganville posts are:

Fort Apache and the Dugout http://a-drifting-cowboy.blogspot.com/2012/08/corriganvilles-fort-apache-and-dugout.html

Posted by Drifting Cowboy at 9:35 AM