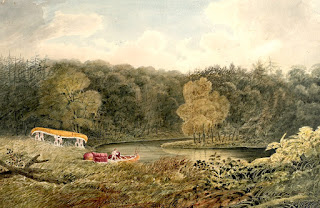 Pierre Poupart, 8th great-grandfather, signed on as a voyageur to accompany explorers Daumont de Saint-Lusson and Nicolas Perrot when they claimed the Great Lakes for France in 1670:

On 3 Sept. 1670 Intendant Jean Talon appointed Simon-François Daumont de Saint-Lusson a deputy commissioner “to seek out the copper mine in the country of the Ottawas, the Nez-Percés [Amikoues], and the Illinois, and of other nations discovered or to be discovered in North America in the region of Lake Superior or Freshwater Sea.”

Nicolas Perrot was asked by Talon to accompany Daumont de Saint-Lusson as an interpreter.  Perrot then formed a new trading company, this time with Jean Dupuis, Denis Masse, Pierre Poupart, Jean Guytard and Jacques Benoît, and set out with Saint-Lusson.

What was being undertaken was a systematic study of the country, following the accounts brought back by the first travelers and the details supplied by the first explorers Cavelier de La Salle, Bréhant de Galinée, Dollier de Casson, Adrien Jolliet, and Marquette. 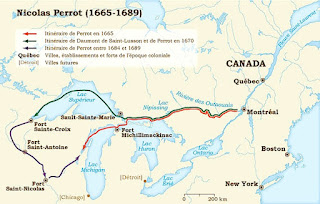 Indeed Daumont de Saint-Lusson, as well as making soundings at the Lake Superior copper mine, was to attempt to discover the northwest passage in a northerly direction, whereas La Salle was instructed to proceed towards the “southern sea.” It was Talon’s reply to the English expansion into Hudson Bay.

Saint-Lusson, accompanied by the interpreter Nicolas Perrot, left Montreal in October 1670 via the Ottawa River, Lake Nipissing, the Rivière des Français (French River), and the Great Lakes; he went ashore at the village of Sault Ste. Marie, where the Jesuits maintained a fairly prosperous mission.

On 4 June 1671 he called together all the Indian nations that could be reached; there were 14 of them.  In the presence of this important gathering of nations and a few prominent Frenchmen a ceremony took place which had important diplomatic consequences.

The interpreter Perrot, in the name of the king of France, began to read in the Indian language from the document that confirmed the appropriation by France of this immense territory, discovered and yet to be discovered, which stretched from the seas of the north and west to that of the south. 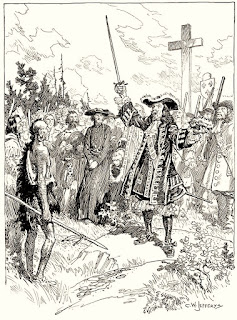 Then they erected a cross, “to bring forth there the fruits of Christianity,” and immediately beside it a cedar post bearing the arms of France. As the crowd, made up of both French and Indians, uttered repeated cheers of “Long live the king,” a “sod of earth” was lifted in the air three times, in a symbolic gesture. Henceforth this part of a continent belonged to the king of France, and these 14 nations were dependent on His Majesty and subject to his laws and customs.  In return they could count on his protection.

The French intoned the Vexilla Regis, to the great wonderment of the Indians. Then Father Allouez delivered a harangue to the Indians in which he extolled the power of Louis XIV, “the Captain of the greatest Captains.”

Daumont de Saint-Lusson then spoke, and expressed himself “in martial and eloquent language.” In the evening a splendid bonfire was lighted, presents were exchanged, and aTe Deum was sung to thank God, in the Indians’ name, for having made of them “the subjects of so great and powerful a Monarch.”

Some Hurons and Ottawas, who arrived late for the ceremony, likewise swore allegiance to Louis XIV. Saint-Lusson’s official journey, which cost the king of France nothing and which added a segment – somewhat symbolically it is true – to his empire, in fact marks the beginning of the planned explorations that were to lead to James Bay, the Gulf of Mexico, and the Rocky Mountains.

Pierre Poupart was the son of Jean Poupart and Marguerite Frichet, born about 1653 in Bobigny, Paris, Ile-de-France, France; he died on 07 Jun 1699 in LaPrairie de la Madeleine, Quebec, Canada. Pierre was killed by the Iroquois at age 40.

Our Lineage from Pierre Poupart: 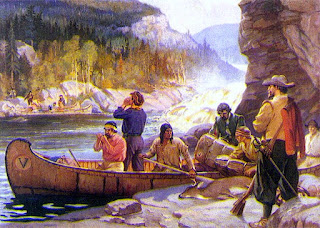 Nicolas Perrot and Toussaint Baudry, who went out with the flotilla of 1667, visited several Wisconsin tribes and broke the Ottawa's monopoly as middlemen. The Potawatomi sent a fleet to Montreal In 1668 and thereafter undertook to act as middlemen for the neighboring tribes. They sent word to the Fox, Miami, Illinois, Kickapoo, and Mascouten tribes that they would no longer have to go to the Ottawa at Chequamegon Bay, for they could obtain French trade goods at La Baye.''

Upon Perrot's return from the lake region in 1670 with reports of the friendliness of the tribes, Jean Talon, intendant of New France, determined upon annexation. Accordingly he dispatched Perrot and a young noble named Francols Daumont de St. Lusson to carry out the ceremony.

The envoys started west in October, 1670, and spent the winter at Georgian Bay. In the spring Perrot summoned the Wisconsin tribes to meet at the Sault. Fifteen tribes were represented at the ceremonies on June 14, 1671, according to St. Lusson's official report.

The annexation pageant was as colorful as the French could conceive. In a manner calculated to Impress the savage heart. From the gateway of the Jesuit mission came the French procession, led by the black-robed fathers, holding high their crucifixes and singing an appropriate Latin hymn. The traders followed, "in motley array of hunting shirts, bright sashes, gay capots, and embroidered moccasins," with Perrot among them.

At the end marched In solitary glory the delegate of King Louis XIV, in the brilliant garb of an officer of the French army, with sword unsheathed and the royal fleur-de-Hs glistening upon his helmet.

On the bank of the Sault, the envoys of the nations awaited, bedecked in all the finery which the occasion required. The Frenchmen blessed the cross, and held it aloft during the chanting of the "Vexilla regis." The royal arms were erected and, after a Jesuit priest had prayed for the king, St. Lusson, sword In hand, proclaimed In a loud voice that he took possession of the country " in the name of the Most High, Most Mighty and Most Redoubtable Monarch Louis, . . . Most Christian King of France and Navarre."

Gifts were exchanged: the savages received knives, mirrors, hats, coats, cloth, blankets, and other articles, and in return they heaped furs at the feet of St. Lusson. Perrot informed the chiefs that they had become
the subjects of the great French king across the ocean. The Jesuit father, Claude Allouez, discoursed on the greatness of the French and their king. He spoke of Onontio (the Indian term for the governor of New
France), whose very name was " the terror of the Iroquois."

In France, he said, were ten thousand Onontios, each but a soldier of the king. St. Lusson's proclamation was an event of great importance in the development of France's stake In the wilderness, the trade by which Canada lived. 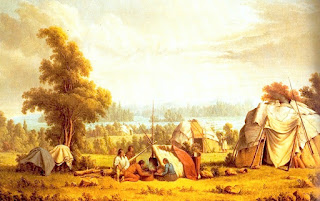 It seems another ancestor: Jean Baptiste Desroches, my 8th great-grandfather, also travelled with Nicolas Perrot on his 1667 exploration...

In 1667 Nicolas Perrot formed a trading company with Toussaint Baudry, Jean Desroches and Isaac Nafrechoux, and together they traveled west to Ottawa. Traveling still further west, Perrot and his partners became the first French traders to deal with the Algonquian tribes near Green Bay in 1668.

Working to break the trade monopoly the Ottawas had over the western tribes, Perrot opened direct trade relations with the Potawatomi and established himself as an Indian diplomat by settling a dispute between the Potawatomi and the Menominee. Perrot returned to Montreal with furs in 1670.

Posted by Drifting Cowboy at 9:57 AM