Great Granddad Gabriel Lemieux was a Voyageur on the Ottawa River 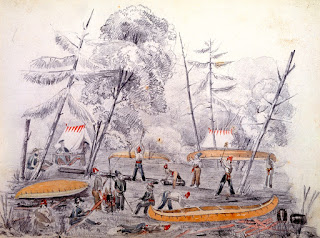 We know from early notary records in the archives of Quebec that Gabriel Lemieux -- my 8th great-grandfather -- made two legal trips as a voyageur.  It's a safe bet that he made other trips as a coureur de bois, a term used to describe unlicensed fur traders and canoemen.

The Ottawa River played an integral role in many of the key stories that make up Canada’s history. It was the route for much of the early European exploration of North America, including Samuel de Champlain. Explorers in search of the Northwest Passage began their journeys along the Ottawa River. Other celebrated figures in Canadian history including Nicollet, Radisson, La Vérendrye, Dulhut and De Troyes, traveled west along the Ottawa River to establish trade relationships with First Nations communities, laying the groundwork for the fur trade.

The fur trade relied on the famous waterway routes that began and ended with the Ottawa River. France’s North American colonial economy depended on the fur trade, which led to the development of the coureurs de bois and voyageurs era, and later to the creation of the North West and Hudson’s Bay Companies. Amid the profound social, political, and economic changes of the 17th  century, the Ottawa River remained one of North America’s most important trading routes. It played a central role in the story of the fur trade in North America, and thus in the development of Canada. 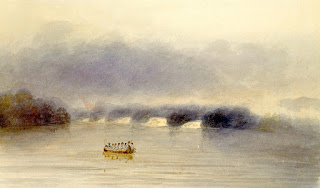 The Ottawa River led to two strategically important sites for the fur trade: The first was Lake Temiskaming post, the largest trading post on the Ottawa under the French. The second, Michilimackinac (now called Mackinaw City, Michigan), was the fur trading hub for the Great Lakes region. It was an 18-20 day voyage from Lachine to Lake Temiskaming, or a 35-40 day voyage from Lachine to Michilimackinac. This second route was extremely important to the fur trade: following the Ottawa River to the Mattawa Forks, voyageurs would then turn west along the Mattawa River, across Lake Nipissing, along the French River, and finally, through the Great Lakes to Michilimackinac. 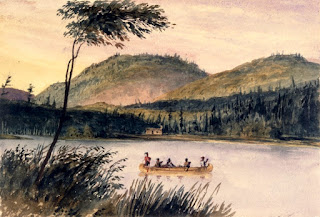 The voyageurs’ tasks varied with the seasons. In summer, they would make long journeys into the continent’s interior, usually following the Ottawa River for much of their way. Their days of paddling were long: they would leave early in the morning and often continue until far into the night. In autumn, they would establish a winter camp near a First Nations village and a body of water. Here, they would build a fort and a few dwellings, and from this base, would trade throughout the winter with First Nations Peoples. In this way, the voyageurs would collect furs from the tribes, even those that lived at great distances. In the springtime, the voyageurs would return along the same route to Montreal. Life was so hard for the voyageurs that desertions were common. 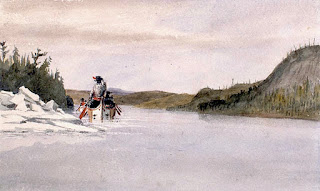 The canoes used by the voyageurs were built following Aboriginal methods, but were designed to fit the colonists’ needs. A voyageur canoe could measure as much as 36 feet in length and nearly 5 feet in width. The boat bore an extremely heavy load. Eight men, each carrying a pack weighing around 40 lbs., as well as a total of 1000 lbs. of provisions, were piled in alongside 60 to 80 bundles, each weighing from 90 to 100 lbs. In total, these slight vessels would carry a load of about 4 tons. Later, canoes carrying 15 people were constructed. Made of birch bark, it was only 1/4 inch thick. Given this, navigation along the rivers was both difficult and dangerous: even a small collision with a rock or piece of floating wood could pierce the canoe’s bark and spoil its precious cargo. After every night of paddling, the canoe had to be unloaded, pulled out of the water, inspected, and repaired. 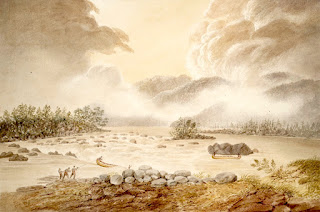 The Ottawa River’s rapids and waterfalls interrupted the days of regular paddling of the voyageurs. Whenever the waters became impassable, the men were forced to stop, disembark, and carry their cargo and canoes through the forest until the waters were again calm enough to continue paddling. The voyageur setting out from Lachine would have twenty portages on his way to Lake Temiskaming, and thirty-five on his way to Michilimackinac.

The majority of these portages were located on the north shore of the river, and followed already existing First Nations portage routes that they fortified to withstand the increased traffic. These portages were long and exhausting. Each man carried two or three bundles of merchandise weighing approximately 90 lbs. each. The men would often have to take several trips back and forth in order to transport all of the gear to the end of the portage route. Portages were so exhausting that the voyageurs measured the exact number of paces required to walk from the beginning to the end of each route. For example, it was recorded that the particularly challenging Grand Calumet portage measured some 2,035 paces long! 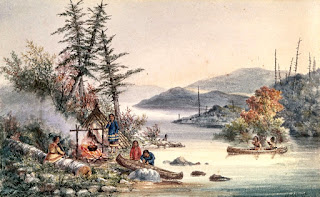 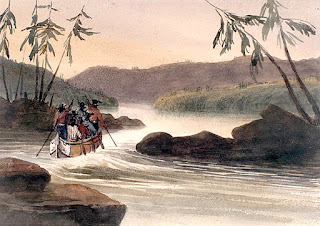 Our Lineage from Gabriel Lemieux:

Posted by Drifting Cowboy at 4:23 PM