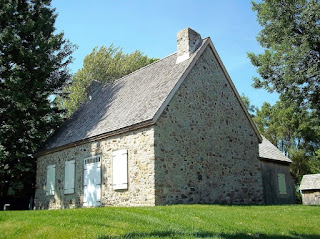 The Le Ber-Le Moyne site and its archaeological collection have also been classified as heritage assets by the ministère de la Culture et des communications du Québec since 2001.

The Le Ber-Le Moyne House was constructed on land which once belonged to the French explorer René-Robert Cavelier de La Salle. 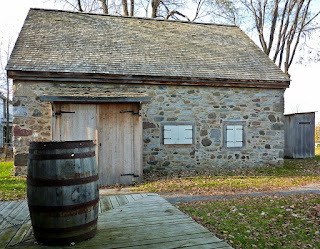 JACQUES LE BER, merchant, seigneur, ennobled in 1696; born c. 1633 in the parish of Pistre, diocese of Rouen, son of Robert Le Ber and Colette Cavelier, who may have been related to Cavelier de La Salle; d. 25 Nov. 1706 in Montreal.

Le Ber came to Canada in 1657 and took up residence in Montreal. A brother, François, also settled there around the same time, and a sister, Marie, became an Ursuline nun in Quebec. The Iroquois were then intensifying their war against the colony and Jacques, living in the area most exposed to their incursions, risked his life on many expeditions against these Indians. In 1663, he and François were members of the militia of the Holy Family which Chomedey de Maisonneuve had organized for the defense of the island.

Le Ber, however, was not primarily a soldier but a businessman. On 7 Jan. 1658, he had wed Jeanne Le Moyne, sister of Charles Le Moyne de Longueuil et de Châteauguay, and shortly afterwards he went into business with his brother-in-law. By 1664, the two partners owned stores in Montreal and Quebec and their affairs were in a flourishing state. Le Ber’s activities, however, were not limited to the fur trade and the sale of merchandise. He was keenly interested in Canada’s other economic resources and was one of the principal pioneers of their development. He engaged in the cod fisheries, in trade with the West Indies, was one of the first men to send staves and sheathing to France, and experimented with the transplanting of European fruit trees.

By the 1670s Le Ber was one of the key figures in the closely knit group of wealthy and ambitious businessmen which had emerged in Canada. Among his associates was Charles Bazire, the partner of Charles Aubert de La Chesnaye, with whom he engaged in various commercial ventures. In 1674, Governor Louis de Buade de Frontenac leased to the two men the post he had founded at Cataracoui, which was strategically located for trade with the Iroquois and some of the western tribes. The following year, however, the governor arranged for the transfer of the lease to Cavelier de La Salle.

Le Ber, who had previously acted as a staunch ally of Frontenac, now became one of his chief adversaries. With Le Moyne, La Chesnaye, and Philippe Gaultier de Comporté, who also felt slighted by Frontenac’s policy, he appears to have organized a rival fur-trading network. In 1682, this group of powerful merchants gained the favour of Le Febvre de La Barre. The new governor promptly placed Le Ber and La Chesnaye in possession of Fort Frontenac (Cataracoui, now Kingston, Ont.) and also encouraged the formation of the Compagnie du Nord, in which Le Ber and Le Moyne invested 21,357 livres.

By the 1680s, Le Ber was one of the wealthiest and most respected men in New France. He owned a store in Montreal and each year sent large quantities of fur and bills of exchange to France. In 1693 alone, those drawn on the state and private parties amounted to 79,380 livres. He was also the seigneur of two-thirds of Île Saint-Paul near Montreal, whose value was given as 18,400 livres in an inventory of 1694, and of Senneville, an estate of 200 arpents on Lac des Deux Montagnes. Le Ber himself lived on Rue Saint-Paul in Montreal, in a two-storey house whose grounds were enclosed by a wooden fence. When he entertained at dinner his guests were probably served on silver plates worth 2,140 livres and waited upon by Jacques, a Negro slave. In 1696, Louis XIV placed a number of letters of nobility on sale in order to replenish his depleted finances. Le Ber promptly purchased his for 6,000 livres and proudly added the title esquire to his name. In August 1715 a decree of the council of state revoked all letters of nobility sold since 1689, but Le Ber’s descendants obtained letters patent exempting them from this law.

Le Ber’s wealth gave him considerable influence in the affairs of the colony. He was one of the 20 notables summoned by Frontenac in 1678 to give their opinion on the brandy trade with the Indians. The majority view was that no restrictions should be placed on this trade, but Le Ber and four others maintained that it should be forbidden outside the confines of the main settlements. The question was temporarily settled the following year when Louis XIV issued an edict that reflected this minority opinion. In 1684, Le Ber sat on another assembly of notables; along with the others present on this occasion, he opposed replacing the tax of 25 per cent on beaver pelts and of 10 per cent on moose-hides by a head tax (capitation) and impositions on foodstuffs and property.

When the Iroquois renewed their war on New France in the early 1680s, Le Ber and his family once more came to the defense of the colony. In 1686, he built a stone mill on the island of Montreal near the Ottawa River to provide the inhabitants of that area with a shelter in case of attack by the Five Nations. In 1693, he joined a war party of 300 Canadians, 100 soldiers, and 230 Indians that attacked the Mohawks in their own territory.

Le Ber died in Montreal on 25 Nov. 1706. According to the report of Jacques Raudot on the financial status of the principal shareholders of the Compagnie de la Colonie, he was then a wealthy man. Le Ber’s wife had died on 8 Nov. 1682, and two sons had also predeceased him: Louis, Sieur de Saint-Paul, who died in the early 1690s in La Rochelle where he had acted as his father’s business agent, and Jean-Vincent, Sieur Du Chesne, fatally wounded during an encounter with an English and Iroquois war party near Fort Chambly in 1691.

Three children survived their father: Jeanne, the famous recluse, Pierre, and Jacques, Sieur de Senneville. While serving in France as aide-de-camp in the 1690s, Senneville dissipated his share of 40,000 livres from his father’s estate. Following his return to Canada, he was made a captain in the colonial regular troops and soon became a successful fur-trader and merchant. When he died in 1735, he and Toussaint Pothier, with whom he had formed a partnership in 1731, had 64,000 livres in cash in their Montreal store.

Source (above): Dictionary of Canadian Biography

Our lineage from Le Ber and Le Moyne:

Charles Le Moyne Sieur de Longueuil (1626 - 1685) - brother-in-law of 9th great-uncle, and his partner in a fur trading post at Montreal.

Francois Leber (1626 - 1694) -- son of Robert LeBer -- 8th great grandfather
* Francois and his three sons were "Coureur-de-bois" and were known as the fathers of the fur trade.

Posted by Drifting Cowboy at 8:54 AM