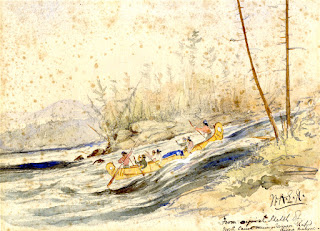 Son of Denis Duquet -- my 8th great-grandfather -- and Catherine Gauthier, Pierre was one of the first pupils of the Jesuit college of Quebec. The Journal des Jésuites stresses on different occasions the role that he played in the musical portion of the religious ceremonies.

Shortly after leaving the college, Duquet, at the age of 20, bought the registry of the notary Guillaume Audouart, whom he succeeded as royal notary. His commission, dated 31 Oct. 1663, made him the first Canadian-born notary.

At this time Duquet had only just returned from an expedition, directed by Guillaume Couture: 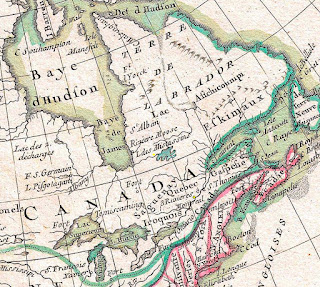 In 1663, Guillaume Couture accepted Governor Dubois Davaugour’s invitation to assume command of an expedition to accompany “the Indians" northwards as far and as long as he shall deem it expedient for the service of the king and the good of the country: and he may go himself or send others to winter with them, if he thinks that his own safety may thereby be ensured and that some public advantage may ensue.”

The expedition was an important one: to find an inland route to the northern sea. Two Frenchmen, Pierre Duquet, later a notary, and Jean Langlois, a shipwright, accompanied Couture; the others were Indians. In all there were 44 canoes.

In an affidavit which he swore in 1688, Couture went over the itinerary they had followed: the group left Quebec in mid-May, started up the Saguenay River, and reached Lake Mistassini on 26 June. A sudden storm left a foot of snow.

The group pushed on, and reached a river [Rupert] “that empties into the Northern Sea.” The French were unable to continue on their route, for the Indian guides refused to go any farther. Couture thus affirmed in 1688 that in 1663 he was unable to make his way to the northern sea.

Like most of the notaries of his period, Duquet had a well-filled career:

He was often given power of attorney by litigants, and in addition he was commissioned to carry out several inquiries into irregularities in the liquor traffic. 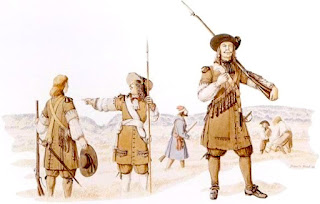 In the autumn of 1666 he went with the Carignan-Salières regiment into Iroquois territory and signed on 17 October the Procès verbal de la prise de possession des forts d’Agnié.

He was Deputy attorney-general (1675–1681), attorney-general (1681–1686), seigneurial judge of Notre-Dame-des-Anges, of the Île d’Orléans and of Orsainville, he was moreover the owner of several properties at Quebec and Lévis and of two seigneuries granted to him in 1672 and 1675.

His multifarious occupations prevented him, however, from giving the desired attention to his notarial acts, in which are to be found many errors and omissions. His registry, which is nevertheless very interesting, is preserved in the Judicial Archives of Quebec.

On 25 August 1666 Duquet had married at Quebec Anne Lamarre, who came originally from the parish of Saint-Sulpice in Paris. 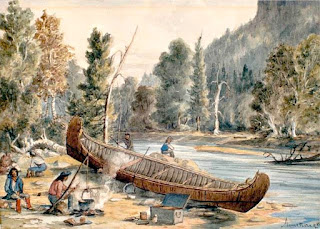 Two of his brothers were Voyageurs or Coureurs De Bois:


To learn about more of my fur trade ancestors see:

Posted by Drifting Cowboy at 6:31 PM