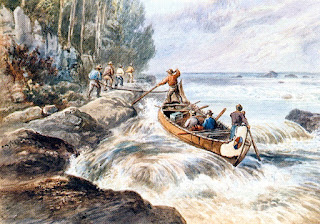 Voyageurs were French-Canadian engages, hired men, who travelled the lakes and rivers in bark canoes from Montreal to Lake Huron, Detroit, Michilimackinac, Green Bay and beyond. This was a physically demanding occupation which involved not only the hardships of nature, but the likelihood of being killed by hostile Indians.

1665 - He arrived in New France as a soldier with the Carignan Regiment. 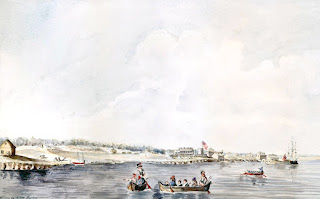 Many of the men who would accompany La Salle on his future voyages were residents of the Fort. By this time, La Salle had made most of his improvements to the fort.

Following are names of the individuals recorded in the census: 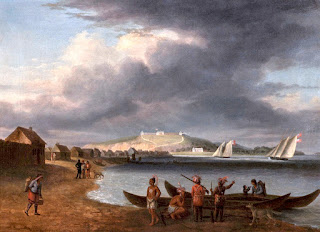 1684 - Leger Hebert of Cap de la Trinite has a trade permit and hires Charles Diel to go to the Outaouais country with Pierre Lefebvre and Antoine Caille on 20 September 1684 for the sum of 630 livres. Because they had never been there before, they are guided by Jean Lesieur dit La Calot who promises to lead them to Michilimackinac without receiving part of their share. That same day, they borrow the value of "2616 livres and six sols" of merchandise.

Charles Diel is 31 years old at the time of the trip to Michilimackinac and has been married to Marie Anne Picard for 8 years. He traded for furs with the Indians in the middle of the Great Lakes at Ft. Michilimackinac. However, he was at his daughter's burial on or about 9 DEC 1684, so he did not winter over on this trip.

1688 - Jean Deniau guarantees them of other trips for Hilarie Bourgine. The first voyage is followed by a second in 1688. On 31 July of that year, Charles Diel promises Antoine Caille to go to the Outaouais to "put forward the good of their association". On the third of August, with Pierre Lefebvre and Andre Danny, he borrows 1063 livres, 2 sols, and six sums of money from Hilarie Bourgine, and, on the same day, in company of Antoine Caille and Pierre Lefebvre, 81 livres, 15 sols and six deniers from the same.

On 20 October 1704, Charles Diel rents to his son-in-law, Francois Bory, for five years, the land of St. Lambert, Laprairie. He sells the moist land to Nicolas Varrin dit Lapistole on 24 July 1707 for the sum of 600 livres.  Is he obtaining money to buy trade goods?

1692 - On 16 SEP 1692, Charles Diel, Antoine Cailler, and Pierre Le febvre appeared at a judicial hearing concerning a payment in fur to Madame Perrot of Laprairie with furs that they apparently transported from Michilimackinac to Montreal for a third party.. ???? pg. 95 Edge of Empire . 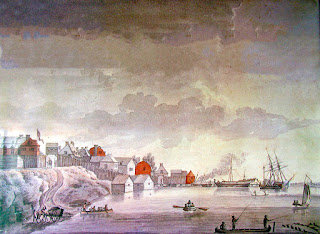 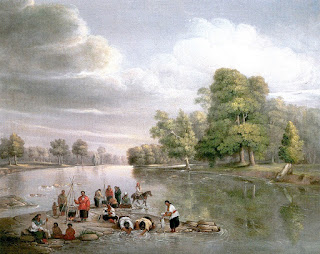 Posted by Drifting Cowboy at 8:07 AM