Cowboy Culture -- Cowboys can live without modern technology, can you? 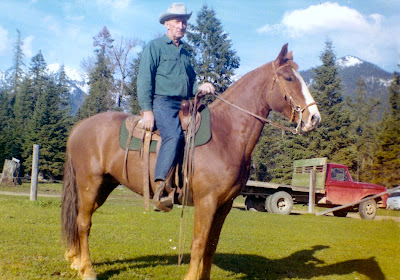 A few weeks ago the power went out at our home--that isn't unusual, but when an hour went by and it wasn't restored I started to worry some.  Without power our radio and television couldn't be used for news, so I grabbed my laptop computer and tried to log-on to the net.  Nothing happened.  Then it occurred to me--the router doesn't work without electricity--dah!

If I was 20 something (years-old) I might have felt doomed, but having grown up in the High Sierras where the power went out in every rain storm I knew I could simply wait it out.

Not having electricity or even indoor plumbing was a way of life for most folks a century ago, and a few like my uncle Lon in Montana (photo above) lived just fine--well in to the 1950s--without modern technology most city folks couldn't tolerate not having.

Their indoor plumbing was a hand-operated pump on the kitchen sink, they heated their house with a wood stove, their toilet was an outdoor privy, and all their lighting was provided by kerosene lamps.

I'm bettin' there are some young folks alive today that couldn't even find Montana without an iphone or some other form of global positioning system (GPS).  Lon and his family finally got electricity and indoor plumbing in the 1960s.

This morning I was thinking about my grandsons and the today's technology.  The things they take for granted--like televisions, computers, and cell phones--didn't even exist when I was a youngster.  I started making a list of the technical advances during my 70 years on plant earth.

I can still recall sittin' in the living room during the 1940s (nobody had a family room in those days) listening to Red Ryder or the Lone Ranger on the radio.  My family didn't own a television until I was about seven years old. Then one day in 1949 dad brought home a brand new Hoffman television set (similar to the ad photo above).  It had a huge 12" screen, and it was a wonder!  I can still remember watching shows like "Time for Beany," "Hopalong Cassidy," and "The Lone Ranger" all of which were new shows in 1949.

A few years later (after we got a 'portable' TV) I recall sitting on the back porch on summer nights watching "Spade Cooley" or "Hollywood Wrestling" while sipping Dad's Old Fashion Root Beer.

The next bit of technology to come to our place was a new RCA 45 record player.  Dad had to have a radio repairman add an audio jack to our Philco radio, so the record player could share the speaker.  Mom was a big country music fan, so from then on we were serenaded by the likes of Eddie Arnold, Tennessee Ernie Ford, and the Sons of the Pioneers.

It was about the time I graduated from high school that color television came into being.

Beginning in the 1960s (about the time America was leading the quest to explore space) technology seemed to advance at 'warp speed' (pun intended).  In quick succession I saw the invention of 8 track tape player, the audio cassette tape player, the video cassette tape recorder and player (VCR) (I got one in 1978), and finally the CD player.

Computers were in the work place by the 1980s, but I always relied on the 'bean counters' and 'finance managers' to generate spread sheets, so I wasted no time fiddling with a computer. 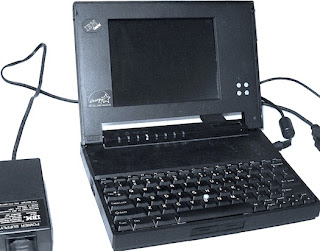 Then in 1993, I landed a nice consulting job for a major California bank.  That job required reports created with 'Word Perfect' (word processing) and 'Lotus 123' (spread sheets).  I bought an IBM laptop, a dot-matrix printer, took a couple of crash courses (software training), and managed to generate my first report for the bank a couple weeks later.

I guess that consulting job put me ahead of the curve with personal computing because by late 1995 I had my own website.  Today I'm amazed by all the new stuff that turns up online every year.

There are those times it's nice just to saddle my horse, ride into the rocky hills of Chatsworth, and drift back in time to place without any man-made gadgets.

I wonder what would happen if some catastrophe knocked out the power grid for a couple of years.  I know I'd be alright,  but I worry about my grandsons.


Posted by Drifting Cowboy at 8:12 AM