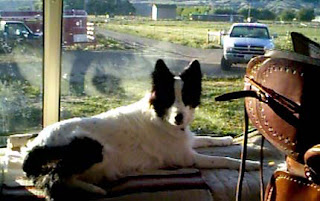 In June 1996 my old pard Roger Miller, Bob DeRoche (an outfitter friend) and I were having breakfast at the Irma in Cody, Wyoming.  After breakfast we stopped by Bob's truck on the way out.  Bob had a cowdog pup in the truck bed, and I started petting him.  "Nice dog," I commented to Bob--"what's his name I asked?"  "Black Butted Bart," Bob replied.

We were staying at Roger's little ranch a few miles out of Cody.  Roger said turn the pup loose and Pinto (Roger's Aussie) will show him the ropes.

About a minute later the two dogs disappeared around the corner of the cabin only to return a half hour later.  When they got back from their romp the pup was green from head to tail.  Pinto had introduced him to the neighbor's cows and Bart (who later became Billy) had rolled in a fresh cow patty.

When I brought Billy home to California my wife convinced me that Black Butted Bart was not a suitable name for a dog, so we changed it to Bronco Billy (we already had a Dalmatian named Annie Oakley). 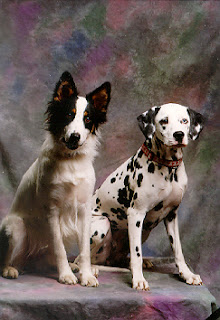 Annie and Billy led our horses on our trail rides all the time we boarded up in Browns Canyon.  Those two were inseparable and had a ball playing together.  Naturally, Billy introduced Annie to rolling in fresh cow patties (an all too frequent event on trail rides).

I lost Annie several years ago, and since Billy crossed over the Great Divide this morning there are no more true cowboy dogs in our home.

Posted by Drifting Cowboy at 11:52 AM