Meanwhile back at the ranch -- Ambush Pass

My next series of posts will be about "Rock Stars" on the upper Iverson Ranch.  Today the upper Iverson is an exclusive gate-guarded community of luxury homes (2007 photo above).  That community--known as Indian Falls--is located north of the Ronald Reagan freeway, and west of Topanga Canyon Boulevard.  Because of extensive development some of the most recognizable ranch features (such as the insert road) are no longer accessible, or have been lost to grading.

Until 2011, the community was accessible to hikers and horsemen, but residents have finally convinced the county of Los Angeles that non-residents need to be kept out, so trail access has been closed.

Fortunately for me I was able to photograph some of the truly unique rock formations before closure of the trails.  Unfortunately for film enthusiasts some of the "Rock Stars" I'll show you (in future posts) are likely to be bulldozed away in the near future. 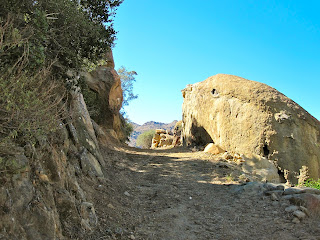 Ambush Pass (2008 photo above) is located a few hundred feet north of the entry gate on Poema Place, and was the access point for an old chase road that followed a rocky ridge-line containing many of the best "Rock Stars" on the ranch.  The pass runs in an east-west direction with Rocky Peak in the background to the west. 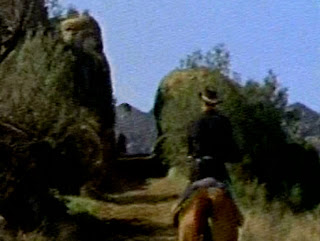 Ambush Pass takes its name from a scene in Quantrill's Raiders (1958) (screenshot above) where a group of Confederate soldiers ambush a Union army detachment.  The rocky pinnacle on the south side of the pass (left in the screenshot above) is actually the base for Turtle Rocks which I'll discuss in a future post. 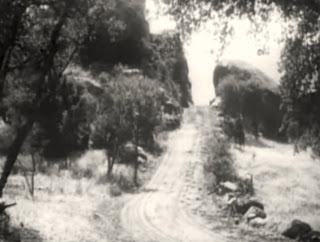 The screenshot above taken from a scene in Grand Canyon Trail (1948) gives us another view of the pass. 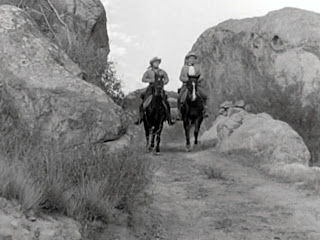 Here's a close up view of Tim Holt and his sidekick Chito coming through the pass in a screenshot from Target (1952). 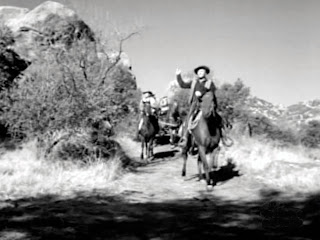 This last screenshot (above) from Toughest Gun in Tombstone (1958) was photographed at a slightly different angle giving you a good look at the rocky slopes to the west leading up to Rocky Peak.