Meanwhile back at the ranch -- Ambush Rock 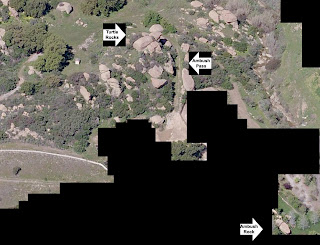 In my last post I told you about Ambush Pass which runs east to west.  The photo above is oriented so that west is at the top.  It shows the location of Ambush Pass as well as Ambush Rock which is further east (at the bottom right).  I've blanked out private homes, but I've tried to preserve the terrain, so you can get a feeling for the way the area appeared during the filming days on the Iverson Ranch.

There where actually several rock formations on the Iverson Ranch that were used for an ambush site, but Ambush Rock offered the most drama because the camera could follow a jumper as he got a running start. 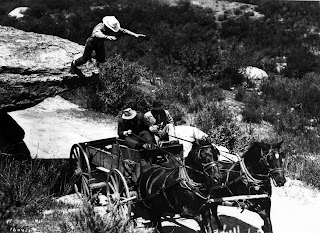 The still above from Robin Hood of Texas (1947) shows Gene Autry's stunt double leaping into the back of an outlaw's buckboard. 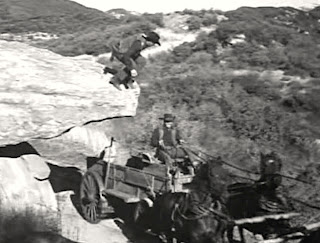 Here's a screenshot from Five Guns to Tombstone (1961) with another stuntman leaping into yet another wagon.

The formation actually sat on the inside of a horseshoe shaped bend, so that the person being ambushed could be filmed coming around a bend with the ambusher leaped down from above.  The sequence of screenshots above (courtesy of John Emmons) captured from "Unwilling Outlaw" a 1952 episode of the "Roy Rogers TV Show" is a perfect illustration of Ambush Rock. 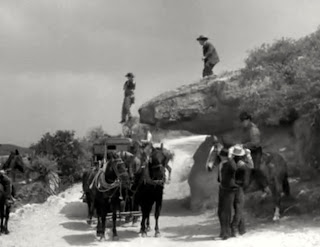 Here's a screenshot from The Wistful Widow of Wagon Gap (1947) filmed from the other side of Ambush Rock. 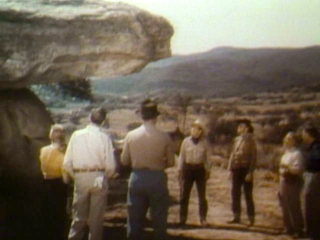 In the Monte Hale film Out California Way (1946)(screenshots above and below) Ambush Rock is featured in a sequence that illustrates how filming is done in an ambush scene. 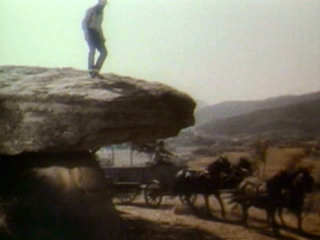 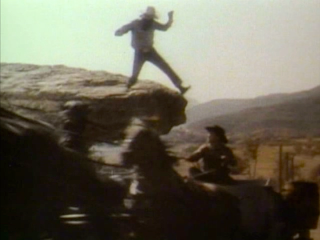 Posted by Drifting Cowboy at 10:02 AM