Meanwhile back at the ranch -- Totem Pole Rocks 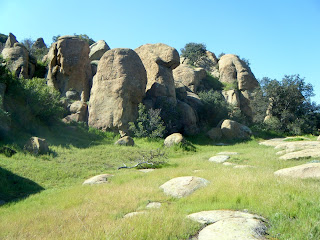 Less than a hundred paces southwest of the Slates--just before you get to Indian Head Rock--you'll find a series of pinnacles that rise abruptly on the east side of the upper Iverson valley.  Collectively I refer to them as Totem Pole Rocks.  They are left center in the photo above (Indian Head is behind the tree on the far right). 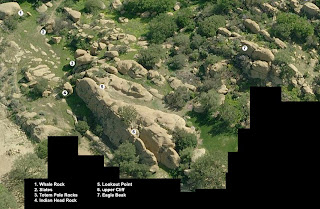 I've labeled several "Rock Stars" in the photo above, so you can get an idea of how close they are to one another.  In the next couple of posts I'll show you Lookout Point which is above Totem Pole Rocks, and the upper ranch Cliff which is contiguous and slightly further southwest. 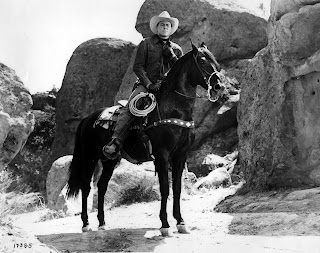 In the movie still (above) from a scene in Captive of Billy the Kid (1952) Rocky Lane and Blackjack are directly in front of Totem Pole Rocks. 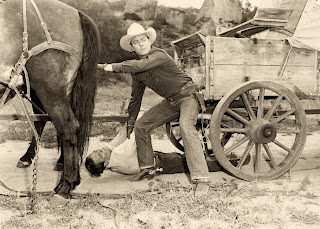 In another still--this one from Fort Dodge Stampede (1951) a wagon stunt has been staged in front of Totem Pole Rocks. 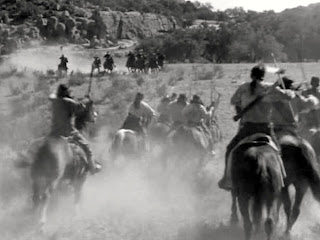 In the screenshot above from Little Big Horn (1951) a camera is set up on the west side of the valley and captures an Indian fight using Totem Pole Rocks and upper ranch Cliff for a backdrop. 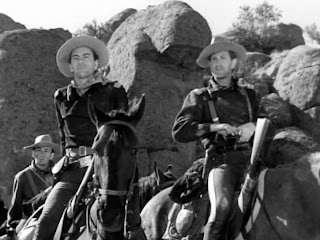 This last screenshot from Little Big Horn (1951) gives us a close up look at stars John Ireland (left) and Lloyd Bridges (right) directly in front of Totem Pole Rocks.

A few of the films that use Totem Pole Rocks for a backdrop include: