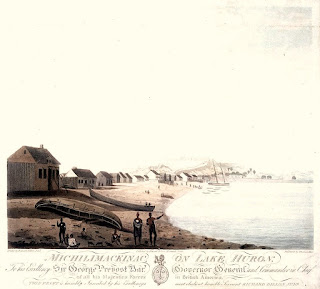 Jean Baptiste Amiot (Amyot), my 1st cousin, 8x removed, was the son of Pierre Amiot and Louise Renaud.  He was born 24 December 1693 in Neuville, Quebec, Canada.

Sometime before 1724 Jean Baptiste Amiot came to Michilimackinac, where he was employed as a blacksmith by the Jesuit priest.

About 1737 he had a serious disagreement with the priest then in charge, probably Pierre Du Jaunay, who consequently fired him, took all his tools, and hired another blacksmith.

A broken gun could mean disaster in the west, and Pierre-Joseph Céloron de Blainville, the commandant, realizing that two smiths were needed for the rapidly growing community and the neighboring Ottawas and Ojibwas, advanced Amiot the funds to continue working.

The priest, citing the monopoly of blacksmithing granted to the mission by the king, insisted that Amiot pay him half his profits. Thus Amiot worked under the watchful eye of the priest in a shop adjoining the rectory.

Although he was training his oldest son Augustin in his craft, Amiot was barely able to eke out an existence on the profits he was allowed to keep.

By 1742, with a family of eight children, he was reduced to begging at the lodges of the local Ottawas, and he was seriously considering moving to the Illinois country.

The Ottawas complained of Amiot’s plight to the governor, Charles de Beauharnois, and as a result of their intercession Amiot was permitted to retain all his profits.


Amiot did a considerable amount of work at the fort during the late 1740s, fixing guns, making axes, tomahawks, and picks, and doing other iron work. Apparently he practiced his trade at Michilimackinac during the busy summer trading season and occasionally spent the winter with hunting Indian bands. 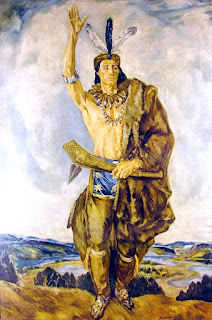 Inspired by chief Pontiac, the local Ojibwas attacked the fort and massacred most of the garrison on 2 June 1763. The commandant, George Etherington, who was ransomed by the Ottawas, rewarded them by having Amiot repair their guns.

Amiot apparently moved to La Baye (Green Bay) sometime after 1763. There he quarrelled with an Indian named Ishquaketa, who had left an axe to be repaired. When Amiot seized the Indian with a pair of hot tongs, the Indian knocked him senseless with the axe.

While Amiot was recovering, another Indian paid him a visit and stabbed him to death as he lay in bed. The exact date of Amiot’s death is unknown for the interment records of La Baye (Green Bay) have not survived. 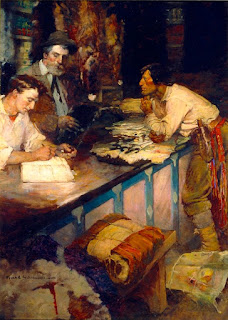 During his lifetime Amiot’s skills as a blacksmith had contributed substantially to the local economy and the necessary maintenance of relations with the Indians.

More from: Technological Adaptation on the Frontier: An Examination of Blacksmithing at Fort Michilimackinac, 1715-1781, by Amy S. Roache-Fedchenko, Syracuse University

An inventory of Amiot’s work from the time he worked for the French military includes the repair or furnishing of screws, sight beads, sights, cocks, ramrod guides, face plates, a bolt, springs, frizzens and tempering, sears, tumblers, a shoulder strap, and the assembly of fusils; all gun parts or gun related work (Amiot 1747 a, 1747b).

These objects indicate that the blacksmith may have been completing work for military personnel and for the purposes of trade relations between the French military and Native American groups.

According to Amiot’s 1747 inventory he was repairing traps and trap parts (Amiot 1747). It is not known for whom Amiot made the repairs, although it is likely that traps were being repaired for traders and Native Americans.

Hoes were documented to have been repaired at the site and show up on French trader’s inventory lists as pioches (LeFeuure 1746; Amiot 1774).

Strike-a-lites, or firesteels, as referred to in historic documents, was another type of object that was documented to have been produced by the blacksmith at Fort Michilimackinac (Amiot 1774). 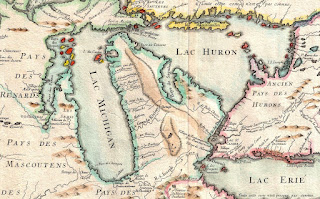 Our lineage from Jean Baptiste Amiot:

Posted by Drifting Cowboy at 5:34 PM