Great-aunt Denise was a Mother of Voyageurs 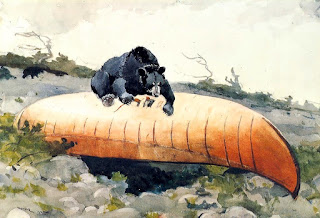 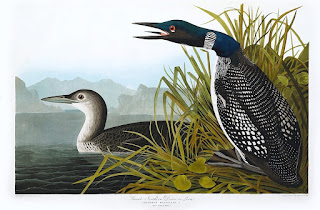 Antoine Martin dit Montpellier -- 1st cousin 9x removed (1694, May 21 - Louis Rouer de Villeray, acting for the ancient company of Jean Oudiette and Pierre Benac, in the name of Charles Catignon, reached an agreement with Antoine Martin dit Montpellier, of St Bernard, Charles Cadieux, of Beauport; Charles Neveu/Nepveu and François Dumesny, of Québec; to go to Michilimackinac to hunt for the furs that Nicolas Perrot had sent sieur Amiot (probably Daniel Joseph) to bring to the Jesuit warehouse in the name of Jacques Charles Patu/Pattu, manager of the ancient company of Oudiette [Chambalon and Roy, Vol. 18, p. 72]) 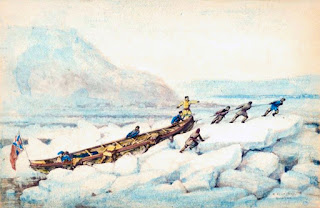 Jacques Nepveu (Neveu) -- 1st cousin 9x removed (1684, Sep 27 - in Québec, between Henri de Tonty, governor of Fort St. Louis de la Louisianne under the authority of De La Salle, and two voyageurs, Jacques Nepveu (Neveu), and Anthoine Duquet Madri. According to the terms of the agreement, Neveu and Madri will travel by canoe to the fort, where they will trade merchandise for beaver skins. Tonty, as outfitter, will provide all merchandise, canoes, provisions, ammunition, and any other necessary items. The two voyageurs can trade at the fort for as long as they desire, and will then transport all beaver skins back to Québec. After the expenses of the trip are deducted, the remaining profits will be divided into halves, with Tonty receiving one half, and the remaining half to be shared between the two voyageurs. In addition, the voyageurs will receive payment in pelts equal to the sum of 150 livres, as well as the right to carry a rifle, two "capots," three shirts, and a blanket to trade for their own profit. They also receive a bonus of 10 beavers. The contract, which had originally included two other voyageurs, brothers Guillaume and Gilles Boissel, whose names are crossed out, is signed by Tonty, Madri, Neveu, and notary Pierre Duquet, in the presence of two witnesses Jacques Turet and Hippolyte Theberge.) 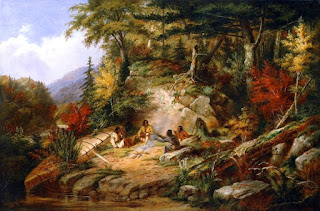 Charles Neveu/Nepveu -- 1st cousin 9x removed (1694 May 21 -  Louis Rouer de Villeray, acting for the ancient company of Jean Oudiette and Pierre Benac, in the name of Charles Catignon, reached an agreement with Antoine Martin dit Montpellier, of StBernard, Charles Cadieux, of Beauport; Charles Neveu/Nepveu and François Dumesny, of Québec; to go to Michilimackinac to hunt for the furs that Nicolas Perrot had sent sieur Amiot (probably Daniel Joseph) to bring to the Jesuit warehouse in the name of Jacques Charles Patu/Pattu, manager of the ancient company of Oudiette [Chambalon and Roy, Vol. 18, p. 72]) 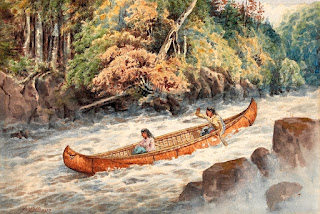 In January 1701, he left Quebec to settle in Montreal, where he appeared as a merchant. His business enterprise, located on Rue Saint-Paul, brought him large profits which enabled him to finance numerous fur-trading trips throughout the pays d’en haut and to organize for himself several of these lucrative expeditions. In 1709 he acquired from his brother Jacques for 200 livres a slave named Marie, who was 11 years old and of the Pawnee tribe.

His financial situation soon enabled him to diversify his investments, and on 28 Nov. 1710 he bought the seigneury of Dautré, situated on the St Lawrence. Five years later, on 21 Sept. 1715, he purchased from the Sulpicians a piece of land situated on Rue Saint-Paul where he had a two-storey stone house built for himself. Then from 1717 on he increased his investments in land; he bought from different owners the seigneury of Lanoraie, which belonged to him in its entirety in 1721. In that year his house on Rue Saint-Paul was destroyed by fire; the recognition of sovereignty and census of Montreal Island in 1731 tells us that at that date it had been rebuilt on the same site and to almost identical dimensions. On 4 July 1739 Governor Charles de Beauharnois and Intendant Hocquart granted him the land at the back of his two seigneuries, extending to the Rivière L’Assomption. This piece of land and his two seigneuries were incorporated into a single seigneury which was called Lanoraie.

Neveu developed his vast domain wisely and encouraged settlement. He had a tar kiln, sawmill, and flour mill built on his lands. He also had built, at his own expense, the first chapel and the presbytery of Lanoraie. In 1744 he gave the site for the building of the first stone church, then in 1752 he made over to the council of the parish, free of charge, a piece of land of 120 acres. 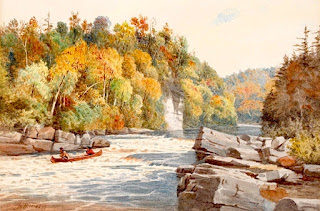 Like many other merchants, Jean-Baptiste Neveu was a churchwarden of the parish of Notre-Dame de Montréal; he exercised this responsibility from 1706 to 1709. He was also a member of the militia of the government of Montreal. In 1720 he was a captain, and in 1737 and 1741 he held the rank of colonel, which he seems to have retained until his death in 1754.

On 24 Jan. 1702, in Montreal, he had married Marie-Jeanne Passard; of this marriage a daughter was born. Having lost his wife on 3 Feb. 1703, he married Françoise-Élisabeth Legras in Montreal on 27 July 1704; of his second marriage 14 children were born. His wife survived him, dying in 1771.

Source: The Fur Trade in Canada: An Introduction to Canadian Economic History, by Harold Adams Innis

Posted by Drifting Cowboy at 5:52 PM